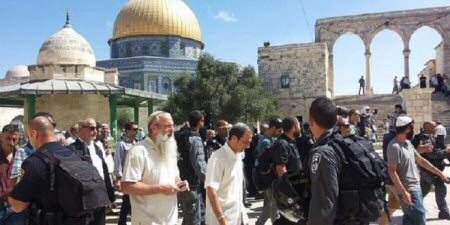 Israeli settlers and occupation forces continue their violations of the sanctity of holy sites in Palestine, with raids occurring on an almost daily basis.

Settlers, on Monday, stormed into  Al-Aqsa Mosque from  al-Mughrabi Gate, under strict security protection from police who imposed restrictions on worshipers entering  the mosque, especially at al-Silsila gate.

PNN reports that Israeli police provided full protection to the extremists, starting from the entrance of al Mughrabi Gate, as they toured  Al-Aqsa courtyards and as they were leaving the gate.

According to the Department of Islamic Waqf in occupied Jerusalem, at 10:30 am, police closed al-Mughrabi Gate as dozens of Israeli settlers stormed in, accompanied by 3 members of the Israeli police. They walked the courtyard of the mosque, and received explanations about the alleged “structure” and history.

On Friday and Saturday specifically, Al-Aqsa Mosque is subjected to a series of extremist intrusions during the morning and afternoon periods, in an attempt to impose the temporal and spatial division of the mosque.