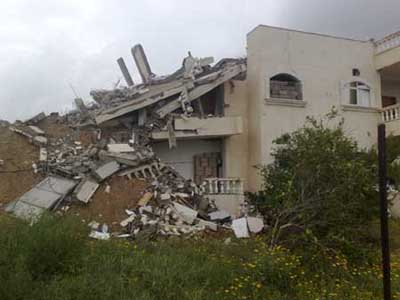 Israeli forces conducted 8 incursions into Palestinian communities in the West Bank., during which they abducted 18 Palestinian civilians, including a child. Among the detainees was Abbas Zaki, member of the Central Committee of the Fatah Movement. In just one example of this week’s invasions, on Friday, 26 March 2010, at approximately 02:00, Israeli forces moved into the city and refugee camp of Jenin. They raided and searched a number of houses and abducted two Palestinian civilians.

On Sunday morning, 28 March 2010, dozens of Palestinian civilians, Christian clerics and international and Israeli human rights defenders participated a peaceful demonstration in Bethlehem, protesting against the fact that Christians were prevented from entering Jerusalem to celebrate Palm Sunday. The demonstration was organized by Holy Land Trust. The demonstrators marched from the yard of the Church of the Nativity towards the southern crossing to Jerusalem. They gathered around the main gate of the crossing and passed through it. They also passed through the second gate. Israeli forces intervened and attacked the demonstrators and drove them away from the crossing. They also abducted 14 demonstrators (10 Palestinians and 4 international and Israeli human rights defenders). They released the human rights defenders several hours later, but kept Palestinian detainees in custody.

At noon on Tuesday, 30 March 2010, dozens of Palestinian civilians and international and Israel human rights defenders and peace activists organized a peaceful demonstration in the center of Budros village, west of Ramallah, celebrating Palestinian Land Day. They marched towards the Annexation Wall. Immediately, Israeli troops fired rubber-coated metal bullets, tear gas canisters and sound bombs, and beat a number of demonstrators. As a result, 3 Palestinian civilians, including a journalist, were wounded by rubber-coated metal bullets. Additionally, a number of other demonstrators sustained bruises or suffered from tear gas inhalation.

In the Gaza Strip, Israeli forces moved into ‘Abassan village, east of Khan Yunis on 26 March 2010. They exchanged fire with Palestinian resistance fighters and shelled Palestinian communities. As a result, two Palestinian brothers, one of whom was a resistance fighter, were killed, and 6 others, including a child, were wounded. During that invasion, Israeli tanks, supported by warplanes, moved into the area. They opened fire at houses and agricultural areas as a number of civilians and journalists gathered in the area to observe the events. At approximately 16:45, Israeli forces moved back to the border between the Gaza Strip and Israel, but continued to fire at the area. At approximately 17:00, as there were reports that a number of people were wounded in the area, Haitham ‘Abdul Hakim ‘Aaref ‘Arafat, 21, and 3 of his friends come to the area to search for wounded people, who they thought might include his brother, 20-year-old Suliman. Soon, Israeli troops fired at them, wounding ‘Arafat and 18-year-old ‘Abed Rabbu ‘Abdullah Abu ‘Anza. The latter was wounded by a gunshot to the shoulder and was able to leave the area. ‘Arafat remained in the area, bleeding. A number of people attempted to reach him to evacuate him to the hospital, but Israeli troops fired at them. As a result, Fadi Mohammed Abu Hajras, 20, was wounded by a gunshot to the foot. Later, residents were able to evacuate ‘Arafat to the hospital. He was seriously wounded by shrapnel. Medical efforts to save his life failed and he was pronounced dead at approximately 22:00. As a result of the indiscriminate Israeli gunfire and shelling, an additional 4 Palestinian civilians were wounded

During the reporting period, 4 Palestinian civilians, including a child, were wounded by Israeli troops stationed on the border between the Gaza Strip and Israel as well as by Israeli naval troops on gunboats patrolling off the shore of the Gaza Strip.

In one example of the Israeli attacks on Gaza this week, on Thursday, March 25th, at approximately 13:30, Israeli troops stationed on observation towers at Beit Hanoun (Erez) crossing in the northern Gaza Strip fired at Sa’id ‘Abdul ‘Aziz Hamdan, 15, from Beit Hanoun, when approached an area 100 meters from the border between the Gaza Strip and Israel. He was wounded by a gunshot to the left foot. According to the child, he had gone to the area to look for his brothers who were collecting construction aggregate from the debris of destroyed buildings. After he was wounded, he managed to approach a number of workers located approximately 100 meters from him. They evacuated him to a hospital in Beit Lahia on an animal cart.

On Tuesday, March 30th, at approximately 11:30, Israeli troops stationed at the border between the Gaza Strip and Israel, to the east of al-Maghazi refugee camp, opened fire at a peaceful demonstration organized by the Public Committee against the Security Fence established by Israeli forces along the border, when a number of young men got as close as two meters to the border. As a result, Mohammed Hani al-Atayi, 21, from Deir al-Balah, was wounded by a gunshot to the right leg.

Israel has continuously closed all border crossings to the Gaza Strip for over two and a half years. The illegal Israeli-imposed siege of Gaza, which has steadily tightened since June 2007, has had a disastrous impact on the humanitarian and economic situation in the Gaza Strip.

The main concern of the population of the Gaza Strip is to obtain their basic needs of food, medicines, water and electricity supplies.

Israel has continued to construct the Annexation Wall and inside West Bank territory. During the reporting period, Israeli forces used force against peaceful demonstrations organized by Palestinian civilians and international and Israeli human rights defenders in protest of the construction of the Wall and the ongoing settlement activities. At least 5 Palestinian civilians, including one child, were wounded by rubber-coated metal bullets, and several others sustained bruises or suffered from tear gas inhalation.

Following the Friday Prayer on 26 March 2010, dozens of Palestinian civilians and international and Israeli human rights defenders organized a peaceful demonstration in protest of the construction of the Annexation Wall in Bil’ein village, west of Ramallah. The demonstrators moved towards the Wall and attempted to access annexed lands behind it. Immediately, Israeli troops fired rubber-coated metal bullets, sound bombs and tear gas canisters at the demonstrators. As a result, dozens of demonstrators suffered from tear gas inhalation, and some of them sustained bruises. Israeli forces also abducted Gur Mintser, 54, an Israeli human rights defender.

Also at noon on Friday, 26 March 2010, dozens of Palestinian civilians and international and human rights defenders organized a peaceful demonstration in Ne’lin village, west of Ramallah, in protest of the construction of the Annexation Wall. They clashed with Israeli forces troops positioned near the Wall. Israeli forces troops fired rubber-coated metal bullets, sound bombs and tear gas canisters at demonstrators. Dozens of demonstrators suffered from tear gas inhalation, and other sustained bruises.

Also following the Friday Prayer on 26 March 2010, dozens of Palestinian civilians and international and Israeli human rights defenders organized a peaceful demonstration protesting against land confiscation in the Wad al-Raya area between the villages of Nabi Saleh and Deir Nizam, northwest of Ramallah. When the demonstrators attempted to reach land seized by Israeli settlers near ‘Halmish’ settlement, Israeli troops fired rubber-coated metal bullets, sound bombs and tear gas canisters at them. As a result, two Palestinian civilians were wounded by rubber-coated metal bullets. Dozens of demonstrators also suffered from tear gas inhalation, and others sustained bruises.

Israel has continued its settlement activities and Israeli settlers living in the West Bank in violation of international humanitarian law have continued to attack Palestinian civilians and property. During the reporting period, Israeli forces issued a military order seizing a 2.5-donum area of land in ‘Awarta village, south of Nablus, to establish a military site, as well as a 900-square-meter area of land in Yanoun village, southeast of Nablus.

Israeli forces have continued to impose severe restrictions on the movement of Palestinian civilians. In just one incident of many that took place this week, on Thursday morning, 25 March 2010, Israeli forces closed 3 alleys in the Jaber quarter, in the southeastern part of the old city of Hebron, with cement blocks, allegedly to secure the movement of Israeli settlers on the road linking between the Ibrahimi Mosque and ‘Kiryat Arba’ settlement.

Due to the number and severity of Israeli human rights violations this week, the PCHR made a number of recommendations to the international community. Among these were a recommendation that the High Contracting Parties to the Fourth Geneva Convention convene a conference to take effective steps to ensure Israel’s respect of the Convention in the Occupied Palestinian Territories and to provide immediate protection for Palestinian civilians.

The PCHR calls upon the High Contracting Parties to the Fourth Geneva Convention to comply with their legal obligations detailed in Article 146 of the Convention to search for and prosecute those responsible for grave breaches, namely war crimes.