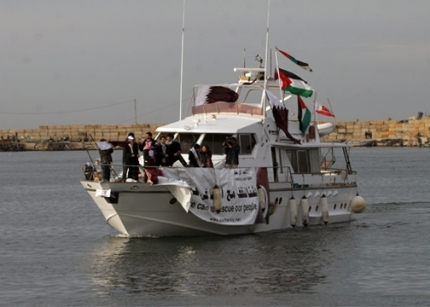 After announcing the purchase of a new cargo ship in Ireland, which will participate in a planned caravan to break the blockade in Gaza, the Free Gaza movement received a message of support from Palestinian Legislative Council memebr Jamal El-Khoudary.El-Khoudary cheered the upcoming aid caravan to Gaza, which he said will consist of a flotilla of between ten and twenty ships filled with humanitarian aid meant to break the Israeli siege on the Gaza Strip. He also applauded the recent announcement of a partnership between the Free Gaza movement and the Foundation for Human Rights & Freedoms & Humanitarian Relief IHH, saying ‘The agreement will give a great momentum for the uprising of ships. I hope they will break the blockade of Gaza and open a waterway between the Gaza Strip and the world to allow freedom of movement”.

The Free Gaza movement plans to launch the latest in their series of aid caravans in early May, and hope to reach the Gaza Strip with much-needed building supplies, as well as medicine and medical equipment.

On March 30, the Free Gaza Movement bought a 1200 tonne cargo ship at an auction in Dundalk, Ireland. The vessel had been impounded a year ago following an inspection by the International Transport Federation (ITF) which found that its’ owners had exploited it’s Lithuanian crew members- not paying their wages and subjecting them to humiliating treatment.

ITF Inspector and SIPTU organiser Ken Fleming said, ‘We are pleased to announce that this vessel which was used to subject workers to modern day slavery, will now be used to promote human rights for the people of Palestine’.

According to the Free Gaza movement, the vessel, the MV Linda, will be re-named the MV Rachel Corrie, in memory of the 23 year old solidarity activist crushed to death in 2003 by an Israeli bulldozer as she attempted to prevent the demolition of a Palestinian home in Gaza. The Free Gaza Movement says the renaming of the ship is meant to pay tribute to Rachel and the thousands of Palestinian men, women and children killed, wounded or imprisoned under Israeli Occupation.

The Free Gaza movement has broken the Israeli-imposed siege on the Gaza Strip twice before, bringing much-needed medicine and other supplies to the people of Gaza, where 1.5 million Palestinians live under an 18-month long siege by the Israeli military which prevents most goods from entering, and prevents them from leaving the tiny coastal Strip.