13 Palestinians Arrested in Pursuit of Activists 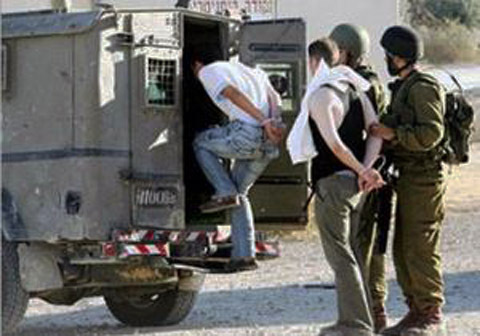 Israeli forces arrested 13 Palestinians for interrogation around the West Bank, on Thursday morning, in a wide-ranging campaign to target suspected activists, the Palestinian Information Centre claimed on Thursday. Two Palestinians were arrested near Ramallah and taken in for questioning, according to Israeli Radio, although neither their identities or affiliations with any organizations were confirmed.

The Israeli military summoned nine others during an arrest in Hebron, local security sources said.

The other two men, known as Numan Abdel Qadir al-Qaisiya, aged 21, and Mustafa Ismail Al Qaisiya, 19, were abducted from their homes during an Israeli raid in the town of Dhahiriyya. Also, further arrests were made following a raid in Dora town.

Earlier on Wednesday, Israeli troops reportedly arrested another young Palestinian, named Abdullah Abu Faara, from Sourief, near the Ibrahimi Mosque in Hebron. On the same day, troops also detained, near to the Ibrahimi Mosque, Ramya Hasan Abu Samira, wife of Amjad Abu Samira, who is serving a life sentence in Israeli military prison.