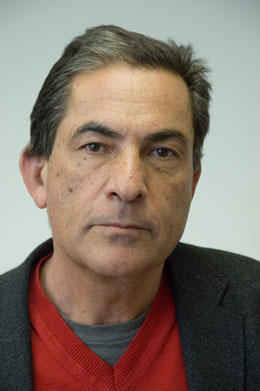 Israeli journalist Gideon Levy left a message of no hope, on Tuesday night, during his visit to the Alternative Information Center in Beit Sahour, the PNN reported. “I don’t see any kind of hope from any direction.” Gideon Levy concluded addressing to the audience when he visited the Alternative Information Center (AIC) in Beit Sahour, near Bethlehem.

Levy came to the AIC venue in Beit Sahour as guest, on one the bi-weekly AICafe evenings, to review the development of Israeli policy and expose the truth about Israel’s occupation of Palestine, including the collective punishment inflicted by Israel on the Gaza Strip (topic explored in his latest book).

Speaking on a variety of issues, the renowned Israeli journalist focused on what he sees as the complicity of the Israeli media and society in crimes of the Occupation.

Highlighting a widespread lack of interest amongst Israelis in ending the occupation as well as a prevalent extreme ideology in government over a weak Israeli left, Levy said: “We used to joke that two Israelis would share three views, but today three Israelis all share one view,”. He added: “When it comes to the unofficial religion of Israel, namely security…the Israeli media has betrayed its mission. Many foreigners who come here are amazed to see how little the Israelis discuss their future, how little they know what’s going on a half an hour away from their homes, how little they want to know, how little they care.”

The Israeli journalist went on arguing that he views settlers as “the only effective, active group” remained in Israel, and that no change should be expected so long as there is a status quo in a largely apathetic Israeli society.

Levy stated he would try to balance his discussion with an optimistic tone but could not dismiss the present realities on the ground. “If we were in the late eighties and I told you that very soon Soviet Russia is going to collapse, the Berlin Wall is going to collapse, and the apartheid regime in South Africa is going to collapse within months, without bloodshed—you would have thought that I was out of my mind…The only problem is that neither in South Africa, nor Soviet Russia, not even in Berlin, were there 300 or 400,000 settlers. It makes me quite helpless in describing an optimistic scenario.” he told the crowd in the AIC.

The journalist pointed out he is not a natural pessimist, but simply did not see a reason to foresee the current situation improving.

Towards the end of his presentation, he expressed concern for viewpoints like his own that are coming under increasing criticism and threat in Israel.

He shared with the public; “I can feel it, I can sense it, it’s becoming less and less pleasant—maybe more dangerous, I can’t judge it. I sleep well at night, and maybe out of stupidity. Maybe there are dangers around that I don’t see.’