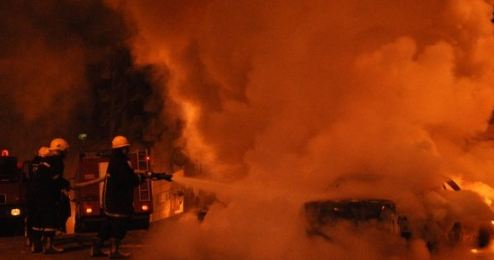 A statement released by Christian priests in Egypt, including the secretary of the Coptic Pope, Shenouda III of Alexandria, revealed that an explosion targeting a church in Alexandria left at least 25 persons dead and more than 79 wounded.Initially 17 persons were killed in the explosion, but some of the seriously wounded died of their wounds later on.

The statement also revealed that four of five of the casualties remained unidentified until the time of the Church’s statement as their bodies were severely mutilated.

The number of wounded residents is way over 79 as several others, with minor injuries, were released without being counted.

The bombing targeted the church as dozens of worshipers were leaving it after a special New Year ceremony and celebration.

It also caused excessive damage to the vehicles parked on the side of the street, and several nearby buildings.

In their statement, the priests said that this bombing is a threat to the security of the nation, and is considered a serious escalation in sectarian violence.

The statement added that the bombing is a result of lies against the Church, its symbols and its followers.

It also said that it does not support the official stance of the government as it stated that “external parties” are behind the bombing.

Egyptian President, Hosni Mubarak, stated following the bombing that the attack “is an act of terrorism carried out by terrorists operating for groups outside of Egypt”.

The Egyptian Interior Ministry also reiterated the same statements, and said that external groups planned and followed the implementation of the attack.

Last Year, January, six Egyptian Christians and one policeman were killed in a gun attack targeting a Church in Qanna city, south of Egypt.

Archmandrite, Atallah Hanna, of the Greek Orthodox Church in Palestine, denounced the attack which he described as a “terrorist attack targeting all Egyptians, and called for unity among all Egyptians to counter there criminal attacks.