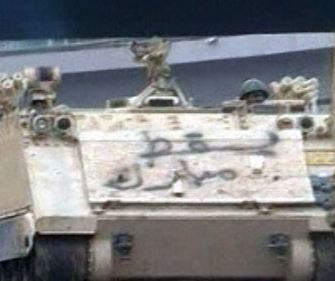 Despite the excessive use of force by the Egyptian Police and security forces, Egyptian protesters continued their activities demanding the regime of Hosni Mubarak to be removed, and calling for fair and democratic elections in the country.
President Mubarak addressed the Egyptians on TV, and stated that he intends to remove the current government, and vowed “reforms”.The protesters continued their demonstrations chanting slogans demanding Mubarak to resign and demanding political freedoms.

The number of Egyptians killed since the protests started is now estimated by 24, while more than 1000 were injured.

As a military leader, Mubarak instructed the army to impose curfew in several Egyptian areas, but the residents challenged the curfew and took off to the streets despite extensive military presence.

The protesters said that the speech of Mubarak lacks the basic components of their demands, and that the new government Mubarak intends to appoint will include “the same persons believed to be corrupt”.

Al Jazeera reporter in Cairo, Mustafa Kafafy, stated that relative calm was observed in Cairo at night while fires continued to consume the torched headquarters of the ruling party and some other government institutions.

Kafafy added that massive protests are expected to take place during the day.
Some sources in Egypt reported that some influential businessmen and officials fled Egypt, and that telecommunications remained shut off under direct orders from the government.

According to the German Press Agency, some clashes took place when thieves wanted to rob stores in Al Tahreer Square in Cairo, and that the thieves, yielding knives and batons, were intercepted by local protesters who formed human shields to protect public property.

Meanwhile, the police continued to fire gas bombs into the Tahreer Square in Cairo while further forces were deployed in the area that leads to the Interior Ministry in the heart of capital.

Shortly after Mubarak finished his speech, the Egyptian army pushed the protesters away from the Tahreer square into a nearby area while they continued to chant “the people want change”.

Al Jazeera reported said that dozens of tanks were deployed in the Tahreer square and near the official Egyptian TV stations, the Parliament and the Ministerial Council building in Cairo in addition to several other nearby areas that witnessed clashes.

On Friday, several protesters managed to reach the main yards of the government-run TV and Radio stations while rounds of live ammunition were heard near the Parliament and the Ministerial Council.

Reports indicated that 15 protesters were killed by Police fire in Suez on Friday while the residents continue to march and to demand the removal of the current regime.

The Egyptian Authorities blocked communications and jammed internet lines in an attempt to stop bloggers from reporting from the ground and from issuing statements and reports regarding protests and similar activities.

Al Jazeera reporter in Alexandria , Mohammad Al Balak, stated that tanks and armored vehicles were deployed in the city and that some police stations were broken into while the army who was deployed there did not intervene.

Al Balak added that the speech delivered by Mubarak did not satisfy the residents as their demands are not only about changing the government, but are also regarding the high levels of unemployment, poverty, and corruption.

Al Jazeera Net reported that protests took place in every part of Alexandria and that the security forces started withdrawing amidst the presence of thousands of protestors.

It added that the protestors managed to control most of the streets in Alexandria, and that several members of the security forces surrendered and removed their weapons and military uniforms.

Several security vehicles and the governor’s office in addition to some police stations were set ablaze.

Several other Airways around the world canceled their flights to Cairo due to the current situation.

The United States and France called on their citizens to refrain from flying to Egypt while Washington also called on Americans in Egypt to restrict their movement in the country.

Yet, Washington said that the Mubarak is a close ally to the United States while its Secretary of State, Hilary Clinton, called for “calm” in Egypt and for government reforms.

Clinton added that “Mubarak is a close ally to Washington”, and described him as an “asset to the peace process”.