Bedouin village bulldozed by Israel for the 12th time 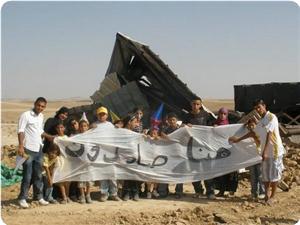 On Monday, the Israeli military and police employed armored bulldozers to destroy the village of Araqib, located in the Negev desert in southern Israel. This is the 12th time that Israeli forces have destroyed the village, which is ‘unrecognized’ by the Israeli government.The demolition, which left several dozen families homeless, comes at a time of record low temperatures in the Negev, with a rare prediction of snow in the coming days.

The village of Araqib has been destroyed eleven times before by the Israeli government, and the villagers have each time rebuilt their homes. They formed a Committee in Defense of Araqib, and have organized non-violent demonstrations with Israeli supporters on a number of occasions calling on the Israeli government to stop destroying their village.

According to Dr. Awad Abu Freih, the spokesman for the Committee in Defense of Araqib, the attack that took place on Monday involved dozens of Israeli bulldozers and armored vehicles. Abu Freih said that the villagers took refuge in the town’s cemetery, where they were surrounded by the Israeli military while the destruction of their homes was completed.

The villagers vowed to remain and rebuild, despite the Israeli government’s promise that the village is ‘unrecognized’ and will continue to be destroyed.