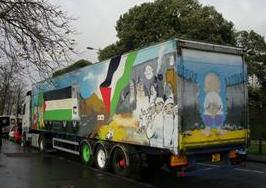 Preparations and final touches are taking place in coordination with the Ministry of Health in Gaza in order to ensure all urgently needed medications, medical supplies, and equipment are onboard the convoy.

Coordination with the Egyptian authorities is currently taking place to ensure that all needed documents are filled in accordance with Egyptian directions and laws, while coordination with the Palestine Affairs office at the Egyptian Foreign Ministry, is also underway while mainly focusing on giving a high priority to the passage of medical supplies into the coastal region.

Convoy organizers stated Tuesday that the convoy will likely arrive in Cairo on October 2nd, and will be holding meetings with several Egyptian officials and institutions.

On October 5th, the convoy will be heading to the Al Arish Egyptian Port in preparation to enter Gaza on the same day. Convoy members will remain in Gaza until October 10th.

There will be approximately 100 persons representing different Arab and European organizations accompanying the convoy. Convoy members are from different countries including Britain, France, Algeria, Jordan, Bahrain, Morocco, Tunisia and Lebanon.

Medical supplies onboard the convoy is estimated by $1.3 Million, including medications totally missing in Gaza, power chairs, 40 wheelchair accessible vans, sports equipment, in addition to physiotherapy and occupational therapy equipment.

There are more than 1.6 Palestinians living in the Gaza Strip, %80 of them are below the official poverty lines, while %65 of the residents are unemployed. One Million Palestinians in Gaza depend on international relief.

Over 300 patients have died since the siege began due to a lack of essential medical equipment, and having been denied exit passes by the Israeli government to receive treatment outside of Gaza.

More than 170 medicines, and 140 other medical items, are currently out of stock in the Gaza Strip due to the ongoing siege despite Israeli claims of easing it.