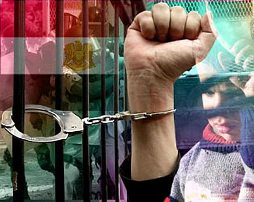 All Palestinian detainees in Israeli jails will join in the open-ended hunger strike on October 11, in response to the humiliating and degrading policies imposed upon them, the Palestine News Agency reported Thursday morningAn official in charge of a human rights organization, Helmi al-Aâ€™araj, reported that Palestinian detainees will strike in solidarity with those detainees in Israeli jails who are already striking, and it may develop to be like the ‘Irish strike’ (in which the detainees’ strike included water and salt), in the face of Israeli Prison Administration (IPA) attempts to break their strike.

Al-Aâ€™araj, appealing to all the popular and official movements to help the detainees, also urged the Human Rights Council and Arab International University to hold meetings to discuss the issue.

The Palestinian detainees declared the open-ended hunger strike to protest escalating measures and polices of the Israeli Prison Administration, and to stop isolation of detainees in solitary confinement for long periods, as in the case of the general secretary of the Popular Front, Ahmad Saâ€™adat, isolated for six years.