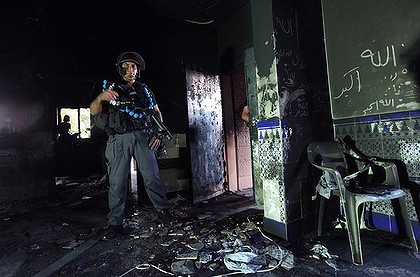 An Israeli court has ruled that there is little or no evidence to support the conviction of a man accused of setting fire to a mosque in the Upper-Galilee village of Tuba Zingerah.Judge Nitza Maimon-Shashua, who issued the ruling, has extended the suspects remand until Sunday, allowing the police further opportunity to gather more evidence.

She has declared that if no new evidence is discovered, she would have no choice but to order the police to release the suspect without charge.

The mosque in the village of Tuba-Zangerah, suffered an arson attack early Monday morning, several hours before dawn. The fire destroyed numerous holy books, and severely damaged the interior of the mosque.

The burning of the mosque was carried out as part of a â€œprice tagâ€ operation, which refers to revenge attacks against people or property (generally Palestinian) due to Palestinian attacks, or decisions announced by the Israeli government, which the extreme right-wing groups strongly disagree with.

The suspect was arrested several hours after the attack, and was taken before the court. His legal representation is being provided by the Hanenu organisation, which provides legal aid and counselling to military personnel brought before the courts over their actions in the occupied West Bank during their compulsory service, or due to their part in right-wing political activities.