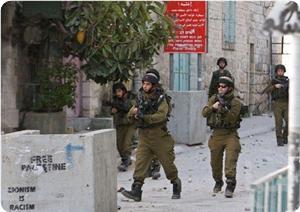 On Saturday morning, a large Israeli force invaded the northern West Bank city of Jenin, the Jenin refugee camp, and the nearby town of Qabatia, The Maan News Agency reported.Security sources reported that an Israeli force, consisting of twelve military vehicles, invaded the city of Jenin and patrolled its streets.

During the incursion into the camp, and the city of Jenin, Palestinian youth began throwing stones at the invading military jeeps, and the army fired tear gas canisters at them; no injuries or detentions were reported.