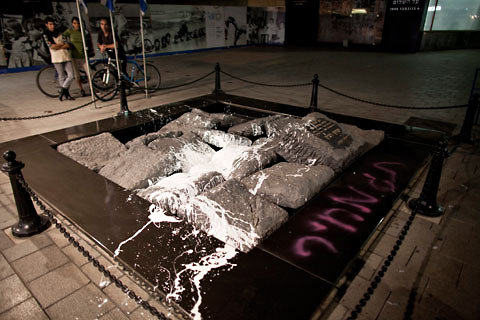 A monument dedicated to former Israeli Prime Minister, Yitzhak Rabin, has been vandalized by an Israeli Jew in protest of the prisoner-swap deal to secure the release of over a thousand Palestinian prisoners in exchange for captured Israeli soldier, Gilad Shalit.Twenty-seven year old Shvuel Schijveschuurder is currently being detained at a Tel Aviv police station, after being caught and admitting to the vandalism.

Yitzhak Rabin was assassinated in 1995 by Yigal Amir, a radical right-wing Orthodox Jew who opposed the signing of the Oslo Accord; he is currently serving a life term in an Israeli prison, .

Shvuel sprayed the words â€œprice tagâ€ and â€œrelease Yigal Amirâ€, and covered the memorial in white paint, after he learnt that two men responsible for the 2001 Sbarro restaurant suicide attack, which claimed the lives of his parents and three siblings, are to be released under the Gilad Shalit prisoner exchange.

He was arrested by City Hall security guards who claimed the young man admitted to the attack, seeming â€œconfusedâ€, and informed them that his family members were hurt in a Palestinian attack.

Shvuel became involved in drugs since the killing of his family, he has been arrested on several occasions, and in 2009 he joined a protest in Jerusalem, in front of the Shalit family tent, when an (unsuccessful) deal was being hammered out to release Palestinian prisoners in exchange for Shalit.

Shvuel stated that he felt betrayed by the State of Israeli and the judicial system, and claimed that he will hunt down those who killed his family, like Simon Wiestenthal, the infamous Nazi Hunter.

Price Tag attacks have been increasing in frequency and severity in recent months, including vandalizing Christian and Muslim cemeteries in Jaffa last week, and the torching of a mosque in the Upper-Galilee village of Tuba Zingerah on Monday morning.