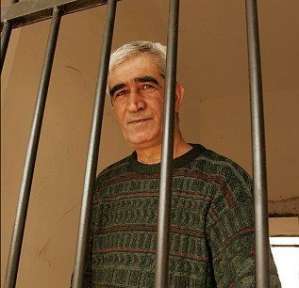 Palestinian Minister of Detainees, Issa Qaraqe’, stated that detained Secretary-General of the leftist Popular Front for the Liberation of Palestine (PFLP), Ahmad Saadat, was moved to the Al Ramla Prison hospital due to health complications following 20 days of hunger strikes. Qaraqe’ demanded the Red Cross to visit Saadat and to ensure he receives the needed medical attention, especially since Israeli prison hospitals, treating Palestinian detainees, are basically clinics that lack the basic medications.

Qaraqe’ also called on all Human Rights groups to practice pressure on Israel to abide by the International Law, and to grant the hunger-striking detainees their legitimate rights, starting with removing all detainees from solitary confinement, and stopping the assaults against them and against their families.

Saadat is also an elected Legislator and one of the well-known leaders of the Palestinian struggle against the Israeli occupation.

Qaraqe’ also said that after Saadat started his hunger strike from his cell, Israel confiscated the salt he mixes with water, the only â€œfoodâ€ striking detainees have, adding that Saadat’s transfer to hospital indicates the seriousness of his situation.

The PFLP issued a press release expressing concern regarding the situation of Saadat, and called on all human rights groups and the Red Cross to ensure its leader receives all needed medical attention.

Mohammad Al Karm, a political leader of the PFLP stated that the Israeli Prison Administration is responsible for the situation of Saadat due to its ongoing violations and attacks against the detainees who had to declare their open-ended hunger strike demanding rights guaranteed to them by the International Law.

He had been in solitary confinement since 2009, and an Israeli court also stripped his family the right to visit him since then; he also suffers from several health conditions.

In December 2008, an Israeli Military Court sentenced Saadat to 30 years imprisonment after holding him responsible for the assassination of Israeli Tourism Minister, Rehavam Zeevi.

Saadat is the successor of Abu Ali Mustafa who was assassinated when, on August 27, 2001, an Israeli war-jet fired a missile at his office in the central West Bank city of Ramallah.

Israel also claims that Saadat is responsible for a suicide bombing that took place in Natanya in 2002 leading to the death of 3 Israelis.

Meanwhile, detained Fateh leader, Marwan Barghouthi, said that he was surprised when the mediated Prisoner-swap between Israel and Hamas was declared, adding that he, Saadat, and other imprisoned leaders, had no role in it and was not consulted about it.

According to Israeli media reports, Barghouthi, Saadat, and senior detained Hamas leaders were not contacted before the deal was signed.

The Arabs48 news website stated that Barghouthi said that nobody consulted them, and that the deal â€œviolates vows made by the Hamas movement to release all detained leadersâ€.

Saadat, Barghouthi and other senior political, and military leaders of the resistance, are not included in the prisoner swap deal signed between Israel and Hamas.

Meanwhile, Hamas sources stated that the prisoner-swap deal will start on Tuesday at 11 in the morning.

The sources added that Shalit will be moved to Egypt via the Rafah Border Terminal after Israel releases the first phase of the detainees.

Detainees that Israel insisted on their forced exile, will also be moved to Egypt vi the Rafah Border Terminal.