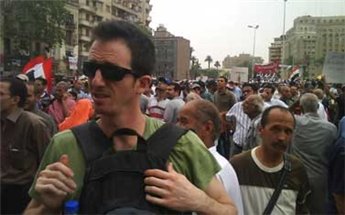 Negotiations are currently underway regarding a deal between Israel, the US and Egypt to exchange the Israeli spy Ilan Gerabil, who is a US passport holder, accused of spying for Israel and burning Egyptian governmental facilities, for 25 Egyptians currently imprisoned by Israeli, the Egyptian News Agency reported late on Monday. The Egyptian detainees are accused of political incitement, and include three Egyptian child detainees in Israeli custody.

The deal, if approved, would be carried out in the next few days.

The Egyptian security forces have been holding Gerabil since May 12th of this year, accusing him of spying for Israel and burning Egyptian governmental facilities.

A statement issued by the office of Israeli Prime Minister Benjamin Netanyahu confirmed that Israel and Egypt are working on an agreement that includes the exchange of 25 Egyptian detainees being held in Israeli prisons for the accused Israeli spy Ilan Gerabil.

The swap deal must be approved by the Israeli cabinet committee, specializing in security affairs. The cabinet session is expected to be held on Tuesday Oct 25th.