Lieberman: “Abbas Is An Obstacle To Peace” 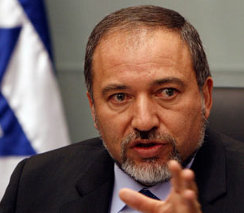 Israeli Foreign Minister of the Yisrael Beiteinu far-right fundamentalist party, Avigdor Lieberman, stated that Palestinian President, Mahmoud Abbas, is the immediate obstacle to peace, and that Abbas’ “his threats to resign are not threats but blessings”. Israeli Ynet News reported that Lieberman stated that the Palestinian President is not focusing on peace but on his own agenda, and that Abbas “is the worst leader that Israel had to deal with”.

Lieberman also said that “any person who replaces Abbas would be a better option”, adding that Abbas is only trying to secure his place in history as the leader who managed to achieve the establishment of a Palestinian State, and as a leader who achieved internal Palestinian unity.

The Israeli Foreign Minister further stated that “should a Palestinian State be established, what guarantees does Israel have that Qassam shells will not be fired from Qalqilia (in the northern part of the West Bank) into Kfar Saba, Ra’anana and Herzliya?”, the Ynet reported.

He further stated that, under the current situation, should Israel relinquish security responsibility in the West Bank “the firing of Qassam shells would increase by %200”.

As for the two-state solution and the issue of settlement construction, Lieberman said that the Palestinian leadership accepted an offer by Prime Minister, Benjamin Netanyahu, outlining the path for a two state solution, “but now, they are asking for more, and carried unilateral acts against Israel”, referring to the United Nations Statehood bid.

The Palestinian Legislative elections of 2006, supervised by international observers, went smooth and without any incident, but Israel and the United States did not like the outcome as the Hamas movement garnered an overwhelming victory.

After Abbas delivered his speech at the UN General Assembly last month, officially filing the application for statehood, Lieberman voiced harsh criticisms against the Palestinian leader and described his speech as “antisemitic”.

It is worth mentioning that before the late Palestinian President, Yasser Arafat, was surrounded by the Israeli Army at his presidential headquarters in Ramallah, until he became seriously ill, likely due to poisoning, and died at a French hospital in November 2004, Israeli leaders kept describing him as “an obstacle to peace that must be removed”.