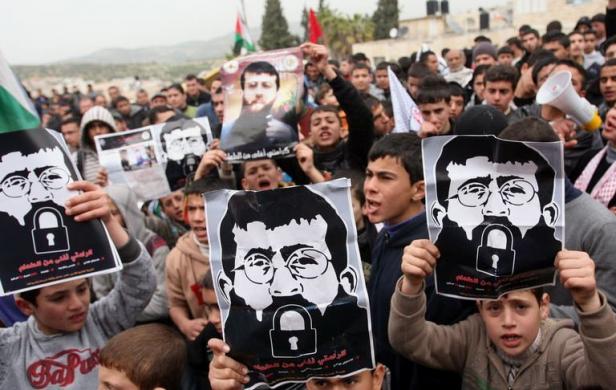 Palestinian prisoner Khader Adnan agreed to end his 66-day hunger strike on Tuesday after meeting with Israeli officials who pledged to release him in April. Khader had been near death, facing possible organ failure, for the last week in an Israeli prison hospital.His case garnered international attention, with solidarity rallies held in cities worldwide, and a worldwide ‘Twitter hashtag’ protest that made #KhaderAdnan a trending topic on Monday.

Adnan’s 66-day hunger strike is the longest one conducted by a Palestinian prisoner in Israeli detention. He began his hunger strike upon his abduction by Israeli troops on December 18th, to protest the fact that he was being held without charges under the so-called ‘administrative detention’.

Israeli authorities frequently hold Palestinians without charges for six-month terms that are often extended, without providing the prisoners or their lawyers with any information as to why they are being held, or allowing them a chance to mount a defense.

A court hearing scheduled for Tuesday was called off after Adnan met with Israeli officials, who negotiated a deal for his release in April. Right-wing Israeli officials, including Foreign Minister Avigdor Lieberman, criticized the deal, and challenged the Israeli Arab Members of the Knesset (Parliament) who voiced support for Adnan. Deputy Speaker for the Israeli Knesset, Danny Danon, said that officials had “capitulated to terrorism’ by agreeing to release Adnan.

Although Khader Adnan agreed to begin taking food again on Tuesday, his health is still at risk, due to the length of time he was without food. Medics have warned that his body may reject the food, and he could still die of organ failure. But Adnan’s family have declared the deal a ‘victory’, and his supporters came out into the streets Tuesday in a number of Palestinian cities to celebrate the decision.