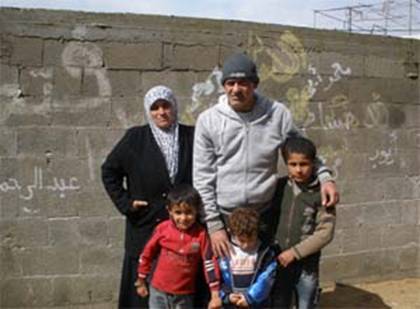 Adila Ahmad Yussef Asalia, 44 years old, is the mother of Ayoub, a 12 year old child killed by an Israeli drone while running after a puppy on his way to school. As she recounts the incident, Adila tries to speak between her tears.

Ayoub was the sixth son of the Asalia family, one of nine brothers and five sisters. Adila speaks of him as a helpful child: ‘Whenever he had time he stayed with me in the kitchen, and helped me make the bread, do the dishes… He was funny, always telling jokes and everybody loved him’.

She remembers that every Friday, he would dress in his best clothes and make fun of his brother Husam, 15 years old, who wears just small shorts:’Don’t you think that I look smarter and more handsome than my brother?’

On Sunday morning, 11 March, Ayoub was getting ready to go to school. He was taking extra lessons before his normal afternoon shift and had to be in class at around 7 am.

He made jokes with his aunt in the kitchen, and asked his mother if she could buy him some new sandals since his were threadbare. Walking on his way to school, he passed his cousin Wafi, a 5 -year- old boy who was playing with a puppy. The dog got scared as Ayoub passed and ran away. As Wafi started to complain, Ayoub ran after it to catch it and bring it back to Wafi.

Kalthum Abdallah Mohamed Asalia, a relative who lives in the house close to the scene, remembers. “I was looking through the window watching the boys when I heard the sound of a drone followed by a big explosion.” She moved away from the window and when she went back there was just half a body, an upper torso with its face to the ground. The neighbors rushed to see who was injured and thinking it was Ayoub they called for Adila to come.

When she first arrived she didn’t recognize his clothes. She looked for Ayoub with the ambulance men and as they didn’t find anyone else, she thought that he must have already gone to school and the ambulance left the scene.

However, at that moment Kalthum remembered that she had seen Ayoub running after the dog and that he wasn’t at school when the bombing happened. With a few neighbors, they decided to continue the search while Adila went back to the house to do some house works.

A neighbor called an ambulance back to help them look for Ayoub, and as a paramedic was looking between trees and bushes, he found half a body of a young boy. Kathum can’t forget the image of the amputated body, just bones and bloody open flesh left.

The neighbors went to look for Adila while the paramedic covered the lower part of Ayoub’s body. Remembering back, Adila doesn’t remember the order of events. Just that she cleaned Ayoub’s face, full of sand and blood, cried a lot, prayed for help, talked to him, cried, went to the hospital, prayed.

Since that Sunday morning, Adila cannot make breakfast for her children. Every day, when they are eating, she ‘faces a hole’ when she looks at the table.’It’s too difficult’. The family has been traumatized by the attack. ‘We are scared to go out, and find a part of Ayoub’s body on a tree, in the street, in the garden.

Since the attack, we all sleep in the same room, with all the children because we are afraid.’

Adila finishes her story saying ‘how can a child face a rocket?’ She wants to think about all Palestinian children and ‘wants them to enjoy safety, security, and freedom’. In the Gaza Strip, between 10-12 March 2012, one other child was killed and twenty were injured.

There were no fighters in the area at the time of the attack. The targeting and killing of a child, a protected civilian, is a war crime, as codified in Articles 8(2)(a)(i) and 8(2)(b)(i) of the Rome Statute of the International Criminal Court.