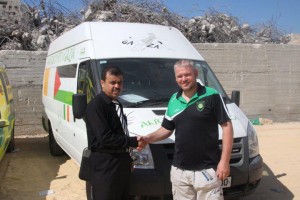 Councillor and chairman of the Irish Moyle District Council, Padraig McShane, will be arriving in Gaza City on Wednesday to officially sign a historic sister city agreement with the City Council in Gaza, the Gaza TV News reported.The Moyle District Council, located in Northern Ireland, voted for the twin agreement three times over the last few months, while the latest vote was held two weeks ago.

The Gaza City Council also voted to back the sister city agreement with Moyle District Council.

After arriving in Gaza, Padraig will be holding a meeting with the mayor of Gaza before signing the sister city agreement, and will also be visiting the location where the Moyle Peace Park will be built.

The official will also be visiting the al-Awda Hospital in order to hold a meeting with a number of physicians and patients, in addition to visiting the Artificial Limbs & Polio Centre at the hospital, the Gaza TV News said.

Padraig had previously visited the Gaza Strip in October of 2010 when he participated in an aid convoy that donated medical aid and educational supplies estimated to be in the region £30,000 in value.

The donation was made on behalf of the residents of Moyle District who decided to aid the impoverished people living in the Gaza Strip, suffering from the ongoing and illegal Israeli siege imposed for more than five years.

Moyle District Council is a Local Council in County Antrim in the north-east corner of Northern Ireland. It covers a largely rural area of approximately 190 square miles (including 42 miles of coastline) and has a population of 15,000.

It is known for the marvelous gorges of Antrim and Bushmills, in addition to the Giants Causeway that is dedicated by the UNESCO as a world heritage location.