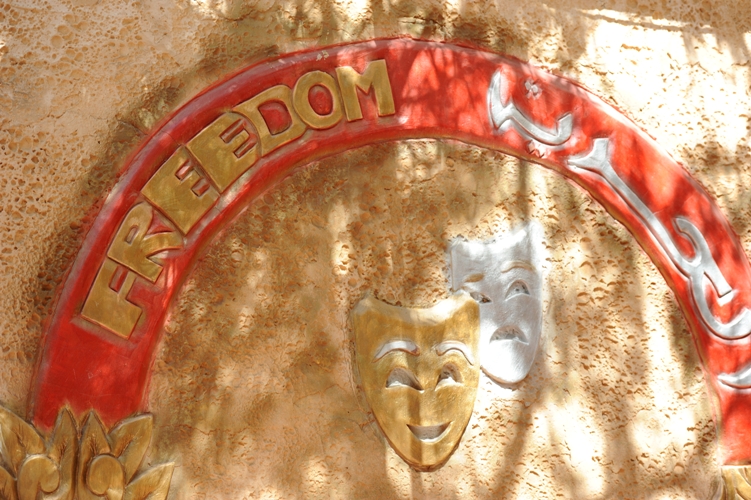 Nabil al-Raee, the artistic director of The Freedom Theatre in Jenin, officially began a hunger strike on July 6th to protest his administrative detention in an Israeli prison, according to the Palestine News Network (PNN). Administrative detention is the Israeli military policy of arresting and holding people in prison without charges. Al-Raee was arrested on June 6th at 3 a.m. during a night raid by the Israeli Army. He was held without charges and without being allowed to meet with a lawyer or his family for the first two weeks of imprisonment. This led to the decision to begin his hunger strike.

He has stated, ‘I don’t know why I’m here. There is no reason for them to keep me here.’

Currently he is being charged with possessing firearms and assisting a wanted fugitive. His wife, Micaela Miranda, described the charges as a “farce” and added, ‘It’s ridiculous and obvious that they are trying to find justification for keeping Nabil incarcerated for so long.’ These new charges were brought against al-Raee only after a military judge declared that there was no evidence of any illegal activity on his part and allowed the prosecution 48 hours to appeal. It was then that these new charges were presented.

The Freedom Theatre has continually been the focus of harassment by Israeli forces since the assassination of the co-founder of the theatre, Juliano Mer Khamis in April of 2011. It has been repeatedly raided at night by Israeli forces and its members have been subject to arrest. The theatre itself has also been attacked.

Zakaria Zubeidi, the other co-founder and director of the theatre, was also hassled by Israel. During the second intifada, Zubeidi was a leader of an armed resistance group, but since 2006 he has been practicing non-violence and cultural resistance. He was granted amnesty by Israel because of this change, but in 2011 that amnesty was revoked. It was re-instated in February of this year, but Zubeidi was not allowed to travel outside of the city of Jenin. In addition to being a violation of his human right to freedom of movement, this restriction limits his ability to actively promote non-violence throughout the West Bank.

On May 13th, Zubeidi was arrested by the Palestinian Authority and is also being held without charge.

The international community, including renowned figures like Danny Glover, Noam Chomsky and Judith Butler, along with thousands of others from around the world have called for the release of al-Raee and Zubeidi.

The current managing director of The Freedom Theatre, Jonatan Stanczak told PNN, ‘Maybe they thought we would break down when Juliano Mer Khamis was assassinated, but we kept on and now they are trying to suffocate us slowly but surely by harassing our employees, members and supporters with various accusations, one more absurd than the other. This systematic harassment has gone on for a year now, it’s enough!’