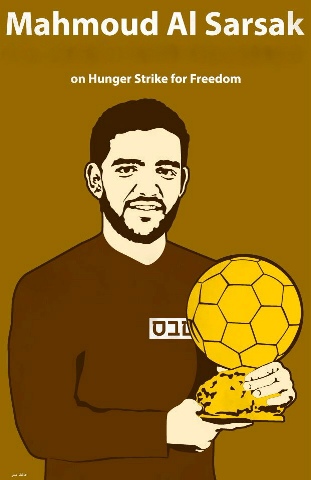 Palestinian political prisoner, Mahmoud Sarsak, arrived on Tuesday at noon at the Beit Hanoun (Erez) terminal, in the northern part of the Gaza Strip, after being released from an Israeli prison following his 96 days of hunger strike.Sarsak was welcomed by a number of Islamic Jihad leaders, and members of his family, before he was moved to the ash-Shifa Hospital in Gaza city for medical checkups.

Nafeth Azzam, a political leader of the Islamic Jihad, called on the Arab countries to act on easing the suffering of the Palestinian people, especially the political prisoners, and added that the “Islamic Jihad will always support the detainees and their legitimate struggle”.

Azzam also stated that all Palestinian factions, and the governments in Gaza and Ramallah, in addition to all Arab and Islamic countries, must step-up their efforts in order to end the suffering of the Palestinian people.

Former political prisoner, Ra’fat Hamdouna, head of the Detainees Media Center, stated that the release of Sarsak is a “victory to all detainees in Israeli prisons and to every person who supported their struggle”.

Sarsak arrived at a near death condition during the 96 days of hunger strike, but remained steadfast and determined to continue his strike until his release, especially since Israel did not filed charges against him and kept him detained under illegal administrative detention orders.

He was abducted by the army on July 22, 2009, at the Erez terminal while he was heading to the Balata Sports Center in Nablus, in the northern part of the West Bank; Sarsak is a professional soccer player. But, despite the fact that Israel granted him a permit to cross into the West Bank, soldiers stationed at the terminal abducted him and took him to the Asqalan interrogation center where he was brutally tortured for 30 days.

On August 23, 2009, Israel issued an arrest warrant against Sarsak, accusing him of being an “illegal combatant”, one of the forms of Administrative Detention used by Israel to confine hundreds of detainees for extended periods of time without charges or trial.

On March 19, 2012, Sarsak started his open-ended hunger strike protesting his illegal imprisonment, and the Israeli Prison Administration moved him from the Negev Detention Camp to solitary confinement in Eshil.

On April 16 2012, Sarsak was moved to the Ramla Prison clinic due to a sharp deterioration in his health condition but he continued his hunger strike and refused to take medication.