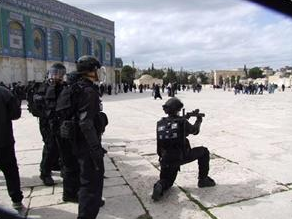 Wednesday evening, March 6, 2013, Palestinian medical sources reported that Israeli soldiers violently attacked and injured three Palestinian youths from Qasra village, south of the northern West Bank city of Nablus.The sources said that the soldiers attacked Ahmad Jaber, Jamil Odah and Dirgham Abu Reeda, all in their twenties, after stopping them at a roadblock installed at the Yitma Junction, near the village.

The soldiers violently attacked and beat the three youths inflicting various fractures and bruises; they were all moved to a local hospital in Nablus.

The village of Qasra has been subject to frequent and escalating Israeli military attacks, and attacks carried out by extremist Israeli settlers who live in illegal settlements in the area.

Recently, Israeli soldiers bulldozed lands and orchards in the village, and destroyed several electricity poles that provide the village with power.

Also in Nablus, the army kidnapped one resident, and took him to an unknown destination.

Eyewitnesses reported that the soldiers removed the veil of the one of the young Palestinian woman.

The attack took place after a group of Israeli settlers stormed the yards of the Al-Aqsa mosque, causing tension and anger among the local Muslim worshipers.

In addition, soldiers invaded the Ein Yabroud village, north of the central West Bank city of Ramallah, and clashed with local youths who hurled stones at them. The army claimed that three soldiers have been mildly injured.