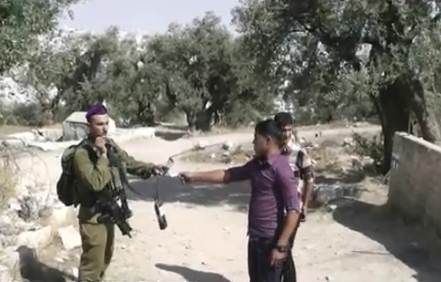 A group of Israeli soldiers invaded the Palestinian city of Hebron Sunday and abducted two Palestinian university students, age 20 and 21, who are members of the non-violent organization ‘Youth Against Settlements’.The two young men, identified as Bassam Abd AlMajeed Amro, 21, and Ali Amro, 20, were standing outside the ‘Steadfastness and Change’ Community Center in Hebron when the soldiers approached them and began shouting in Hebrew, accusing them of throwing stones.

The scene is captured in a video by human rights activists, who posted it on Youtube. The youth appear to not understand the soldiers’ accusations against them, but are completely compliant with the soldiers commands, standing calmly and handing over their ID cards. Other community members arrive on the scene and begin to respond to the soldiers, saying that no one was throwing stones at them, and saying that the soldiers are lying.

More soldiers then arrive on the scene, and they take the two young men away to an unknown destination.

This is not the first time that volunteers with ‘Youth Against Settlements’ have been targeted. The group’s main organizers have all been abducted multiple times by the Israeli military, and interrogated about their non-violent organizing.

In response to Sunday’s abductions, the Youth Against Settlements called on the international Community and Human Rights Organizations to provide protection for humanitarian activists like the two young men abducted Sunday, and asking for immediate intervention to demand their release.