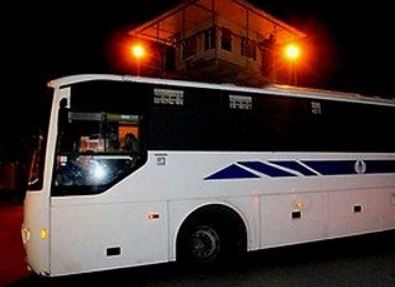 Israeli sources have reported that Israel started the release of 26 Palestinian political prisoners as part of the efforts to resume direct peace talks with the Palestinians. The release started after the Israeli High Court rejected appeals filed against the release.Israeli daily, Haaretz, have reported that the detainees were removed from their cells at the Ayalon Israel prison, where they were moved to, in order to transfer them to the border with Gaza, and to the West Bank.

The freed detainees have been kidnapped by the army between the years 1985 and 2001, Haaretz said, and added that they will all be allowed back home.

The Maan News Agency reported that the detainees, placed in two buses with tinted windows, were moved to the Ofer Israeli prison, west of the central West Bank city of Ramallah, and to the Erez terminal with the Gaza Strip.

Meanwhile, Haaretz quoted an Israeli official stating that the detainees were placed in sealed and tinted buses so that they would not be able to stretch their hands out of the buses to wave victory signs.

In addition, several Israelis, including relatives of those hurt in Palestinian attacks, attacked the buses as they left the Ayalon prison, and were removed by Israeli soldiers and police officers.

According to Maan News, the Israeli protesters also demanded Israel to release Israelis who killed Palestinians, including an Israeli who, on May 20 1990, killed seven Palestinian workers, and injured at least ten others in Reshon Letzion (Oyoun Qarra).

On his part, Palestinian President, Mahmoud Abbas, asked the Palestinian leadership to gather at his headquarters in Ramallah to welcome the released detainees.