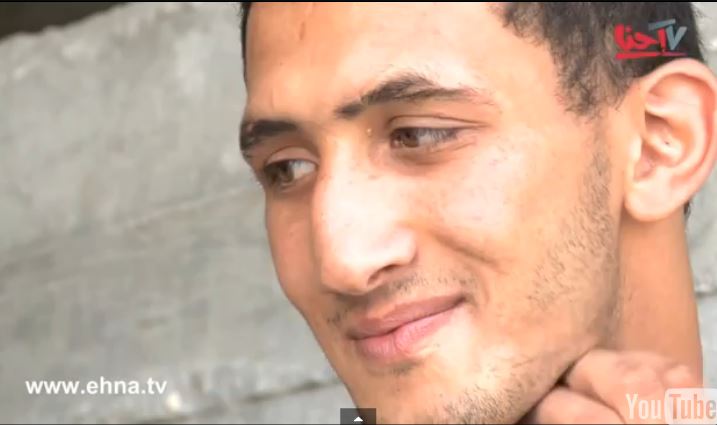 Ahmad Obeid is a young Palestinian man who cannot speak, and is suffering from a mental disability.

Approximately a week ago, he was violently attacked and beaten by Israeli soldiers in Al-Isawiyya, in occupied East Jerusalem, and is now under house arrest awaiting trial. A trial date was never set by the court.

The soldiers kicked and punched him, and where just throwing him around despite his pleads and sign language he used to communicate with the soldiers.
However, the soldiers showed no mercy and continued to assault the youth before kidnapping him.

Obeid was kidnapped during clashes that took place in Al-Isawiyya after Israeli soldiers shot and killed three Palestinians in the Qalandia refugee camp, north of occupied Jerusalem, and injured dozens of Palestinians.

Many of the wounded suffered moderate-to-severe injuries as the army used dozens of rounds of live ammunition against the unarmed Palestinians in the camp.

Obeid was not participating in the protests, but was “captured’ by Israeli soldiers who showed no mercy, and just poured their hatred and racism onto this young man.

After violently beating him, forcing his head onto the ground and stepping on his face and body, the soldiers went ahead and kidnapped him.

His father had to plead with the court to release him, and presented all sorts of medical reports and documentation explaining the mental and physical situation of his son.

Obeid was interviewed by a team of the Ehna TV, an Arab TV station run by young men and women, and broadcasts on the Internet inside historic Palestine to deliver the real voice and image of the indigenous Arab, Palestinian population in the country.

His father told Ehna TV that Obeid was heading to the bakery to buy some bread, but was caught amidst the clashes, and a group of undercover soldiers of the Israeli military violently attacked his son, kicking and beating him, and threw him onto the ground before stepping on him, and kicked him over and over again.

His mother said that when the soldiers kidnapped him they were beating him on his head, neck, back and every part of his body, and that he tried to communicate with the soldiers using sign language but they just continued to beat him.

The youth was imprisoned, and later on was sent to District Court the first time, then for the second and the third time. He father then filed an appeal to the High Court after his son received additional 15 days imprisonment.

The Central Court ordered the release of Mohammad after forcing his father to pay 2500 NIS bail (Around $705), and ordered the father to sign another document obliging him to pay additional 5000NIS fine, in addition to forcing the son to sign a similar document, as a guarantee to ensure his appearance in court later on.

The son was then released, but was forced under house arrest until a court date is set.

The case of this young man is one of not only hundreds, but also thousands, of cases of abuse carried out by Israeli soldiers and police officers against innocent Palestinian youths and children, and against physically and mentally challenged Palestinians in different part of occupied Palestine.