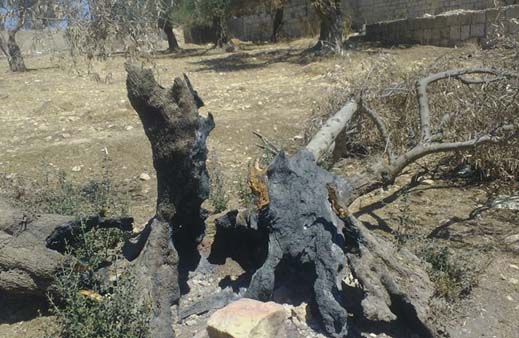 On 07 September 2013, Israeli forces stationed along the annexation wall between the far south of Hebron, south of the West Bank, and Israel, opened fire at a number of Palestinian labourers when they attempted to cross the wall through a hole looking for work. As a result, 2 of them were wounded. Their wounds were described as moderate. Ali Abu Zuhra said to PCHR’s fieldworker: ‘I help my father in supporting our 10-member family. I go to work every day through the hole in the annexation wall that separates Arab al-Ramadeen area, south of Hebron, from Israel, as I have no work permit because I am still young. At approximately 14:00 on Saturday, 07 September 2013, I went out of home in Yatta to al-Daheriya village, where a vehicle took me with other workers to the area from which we cross the wall. At approximately 15:00, we reached the area about 500 meters away from the hole. We waited for 15 minutes, because some workers were crossing the wall. I then decided with my cousin Nour al-Din Abu Ali (21) and other workers to cross the wall. We actually went to the hole and crossed the wall. We waited for the vehicle that takes us to work for about a minutes. Then, we suddenly heard heavy gunfire. We stood still fearing of being wounded if we tried to run away, but it was in vain. Fire was everywhere around us. We hurried back to the hole because we did not know the source of fire. I was wounded by a bullet to the right leg, but I kept running about 500 more meters. I was few meters away from the vehicle when my leg hurt me and I fell to the ground. I crawled until the driver helped me. In the meanwhile, I saw Nour al-Din on the ground before he could jump through the
hole. Israeli soldiers were surrounding him, while a military ambulance was in the area. I was taken to a medical centre in al-Daheriya village. They found out the bullet had entered and exited my leg. I received the necessary medical treatment. I then took another vehicle and went to Hebron Hospital, where they discovered the bullet affected my leg nerve. My uncle Nabil Abu Ali told me his son Nour al-Din was in ‘Soroka’ Hospital in Israel.’

Israeli authorities forced a civilian to demolish his own house in Jabal al-Mukabber neighbourhood, under the pretext of non-licensing.

Israeli authorities distributed administrative orders to demolish a number of commercial facilities and a sports-ground in Selwan village, under the pretext of non-licensing.

Lands, north of al-Eisawiya village, were levelled to establish a trench separating the village from the ‘French Hill’ settlement.

On 08 September 2013, Israeli gunboats stationed off al-Waha resort, northwest of Beit Lahia in the northern Gaza Strip, opened fire at Palestinian fishing boats that were sailing about 4 nautical miles off the shore. The fishermen were frightened and fled back to the shore fearing of being abducted or injured. Neither casualties nor material damage were reported. On 10 September 2013, Israeli navy forces confiscated 2 fishing boats belonging to Palestinian fishermen off Rafah shore in the southern Gaza Strip.

Also in the Gaza Strip, on 09 September 2013, Israeli forces stationed along the border fence, east of al-Bureij refugee camp, abducted 4 Palestinians, including a child, who crossed the fence. Israeli forces took them to a military site and questioned them., but released them at approximately 01:00, on the following day.

Israel has continued to impose a total closure and has isolated the Gaza Strip from the outside world. The illegal closure of the Gaza Strip, which has steadily tightened since June 2007, has had a disastrous impact on the humanitarian and economic situation in the Gaza Strip. The Israeli authorities impose measures to undermine the freedom of trade, including the basic needs for the Gaza Strip population and the agricultural and industrial products to be exported. For 7 consecutive years, Israel has tightened the land and naval closure to isolate the Gaza Strip from the West Bank, including occupied Jerusalem, and other countries around the world. This resulted in a grave violation of the economic, social and cultural rights and a deterioration of living conditions for 1.7 million people. The Israeli authorities has established Karm Abu Salem (Kerem Shaloum) as the sole crossing for imports and exports in order to exercise its control over the Gaza Strip’s economy that has been aggravating for years due to the shortage of imports. They also aim at imposing a complete ban on the Gaza Strip’s exports.

Settlers threw stones at Palestinian civilians and their vehicles in al-Sowana neighbourhood.

Hundreds of settlers moved into Ein Selwan in Selwan village to perform their religious rituals of the Jewish holidays.

On the same day, Israeli forces accompanied by 2 officers from the Israeli ‘Civil Administration’ moved into Um Rukba area, the southern entrance of al-Khader village, south of Bethlehem. They handed Nasser Saleh Salah (43) a notice to demolish a 30-square-meter agricultural room and to halt construction works in an under construction 60-square-meter house under the pretext of non-licensing.

On 09 September 2013, a group of settlers from ‘Beit Eil’ settlement that is established near Ramallah threw stones at Palestinian vehicles driving over the nearby main street. As a result, windows of 5 vehicles were damaged.

On the same day, a group of settlers from ‘Ma’oun’ settlement that is established in the east of Yatta, south of Hebron, cut and damage olive trees (over 20 years old) in al-Hamra area, east of al-Tawani village, east of Yatta.

On 10 September 2013, some settlers from the group of ‘Paying the Price’ punctured tyres of 3 buses and wrote racist slogans such as ‘Death to the Arabs’, ‘Stone Terrorists’, and ‘Paying the Price’ in al-Thawri neighbourhood in Selwan village, south of the old town of occupied Jerusalem.

3 civilians, including a photojournalist, were wounded when Israeli forces dispersed peaceful protests against the annexation wall, while dozens of civilians suffered tear gas inhalation.

During the reporting period, Israeli forces continued the systematic use of excessive force against peaceful protests organised by Palestinian, Israeli and international activists against the construction of the annexation wall and settlement activities in the West Bank. As a result, 3 civilians, including a photojournalist, were wounded. Furthermore, dozens suffered tear gas inhalation and other sustained bruises.

Following the Friday prayer, 06 September 2013, dozens of Palestinian civilians and international and Israeli human rights defenders organised a peaceful demonstration in Bil’in village, west of Ramallah, in protest at the construction of the annexation wall and settlement activities. The demonstrators raised the Palestinian flag and made their way towards the annexation wall. Israeli forces closed the wall gate with barbwire and when the demonstrators attempted to access the lands behind the barbwire, they were stopped by Israeli soldiers. The demonstrators threw stones at the Israeli soldiers who responded with live ammunition, rubber-coated metal bullets, sound bombs, and tear gas canisters, and chased them across olive fields as far as the outskirts of the village. As a result, dozens suffered tear gas inhalation and others sustained bruises.

Also, following the Friday Prayer, dozens of Palestinian civilians and international and Israeli human rights defenders organised a peaceful demonstration in Ni’lin village, west of Ramallah, in protest at the construction of the annexation wall and settlement activities. The demonstrators made their way towards the annexation wall. Israeli forces closed the wall gate with barbwire and, when the demonstrators attempted to access the lands behind the barbwire, they were stopped by Israeli soldiers. The demonstrators threw stones at the Israeli soldiers who responded with live ammunition, rubber-coated metal bullets, sound bombs, and tear gas canisters, and chased them across olive fields as far as the outskirts of the village. As a result, dozens of demonstrators suffered tear gas inhalation and others sustained bruises.

Around the same time on Friday, dozens of Palestinian civilians, Israeli and international human rights activists gathered at the Martyrs Square in al-Nabi Saleh village, northwest of Ramallah, to hold a weekly peaceful protest against the construction of the annexation wall and settlement activities. The protesters walked towards Palestinian lands that Israeli settlers from the nearby ‘Halmish’ settlement are trying to seize. From the morning, Israeli forces had closed all entrances to the village to prevent Palestinians, international activists, and journalists from joining the demonstration. Upon their arrival in the area, Israeli soldiers fired live ammunition, rubber-coated bullets, sound bombs, and tear gas canisters, chased the demonstrators into the village and sprayed them and civilian houses with waste water. As a result, dozens of Palestinians suffered tear gas inhalation and others sustained bruises.

Around the same time on Friday, dozens of Palestinian civilians from al-Ma’sarah village, south of Bethlehem, and a number of international activists and popular resistance activists organized a peaceful demonstration against the annexation wall and settlement activities. They gathered in front of al-Shomou’ Cultural Centre in the centre of the village and made their way through the village streets. They raised Palestinian and Syrian flags and portraits of Palestinian prisoners and martyrs. When they approached the annexation wall, Israeli soldiers dispersed the demonstrators with tear gas canisters. They also abducted Hassan Abdul Karim Breijiya (44), coordinator of the popular committee against settlement activities, and realised him later on bail.

Due to the number and severity of Israeli human rights violations this week, the PCHR made several recommendations to the international community. Among these were a recommendation that the UN General Assembly and Human Rights Council explicitly declare that the Israeli closure policy in Gaza and the annexation wall in the West Bank are illegal, and accordingly refer the two issues to the UN Security Council to impose sanctions on Israel to compel it to remove them;

In addition, the PCHR calls upon the international community, in light of its failure to the stop the aggression on the Palestinian people, to at least fulfil its obligation to reconstruct the Gaza Strip after the series of hostilities launched by Israel which directed targeted the civilian infrastructure