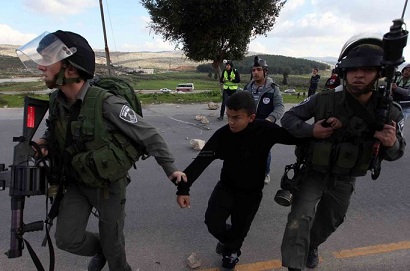 [Sunday Evening November 3, 2013] A number of Israeli soldiers invaded a Palestinian home in the Bab Hatta neighborhood, in occupied East Jerusalem, and kidnapped two children, after violently searching their home.Resident Amer Es’eed said that dozens of soldiers broke into his home and thoroughly searched it and its exterior, and kidnapped his sons Obaida, 15, and Othman, 14.

Es’eed added that the soldiers confiscated some cleaning materials from the house, and took his sons to the Al-Maskobiyya detention and interrogation facility in the city.

The man further said that the soldiers violently attacked him, his brother Yasser, and his son Suleiman, and ordered him to head to the Al-Maskobiyya for interrogation on Monday.

Es’eed added that his son Obaida spent five months in an Israeli prison, and was only released ten days ago.

In related news, Israeli police officers forced shops and stores in Al-Wad Market Street and Al-Attareen Street, in the Old City, to close their stores as extremist Israeli settlers marched into the Old City.