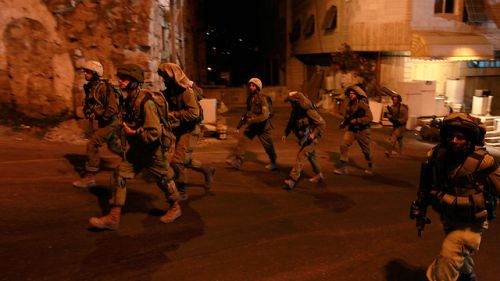 Palestinian medical sources report that three Palestinians have been killed by Israeli army fire, on Tuesday evening [November 26, 2013], east of Yatta town, south of the southern West Bank city of Hebron.The Red Crescent Society in Hebron stated that the three have been identified as Mahmoud Khaled Najjar and Mohammad Mousa Fansha, both from Yatta, and Mohammad Fuad Nairoukh from Hebron.

The army initially prevented the medics from reaching the bodies of the slain Palestinians, only informing them of their identities. The ambulance was only allowed through late Tuesday night.

Furthermore, medical sources in Hebron deny reports claiming that the army killed a fourth Palestinian during the attack.

The Israeli military alleges that it killed three members of a “Salafist Jihadist group on its way to open fire at Israeli targets”, and that the soldiers found two pistols and explosive charges in a car which belonged to them.

The army also kidnapped several Palestinians in the area before killing the three Palestinians and declaring it a closed military zone.

Meanwhile, Israel’s TV Channel 10 said that the operation in Hebron is not over yet, as the army is still searching for more “wanted Palestinians” believed to be hiding in Yatta or nearby.

An Israeli military commander stated that the soldiers fired live rounds at the wheels of a car transporting gunmen, an issue which led to exchanges of fire leading to the death of three Palestinians.

He claimed that the ‘cell planned to abduct an Israeli soldier” in addition to “planning other attacks against Israeli targets in the Hebron area.”

His claims are similar to statements recently made from Yatta, by the Israeli Shin Bet (Internal Security Agency), which announced the arrest of two Palestinians belonging to the same group in Hebron and Nablus, and that all investigations have led to the conclusion that the group intends to attack Israeli targets, in addition to planning attacks against the Palestinian Authority in the West Bank.

The Shin Bet claimed that the group prepared apartments for its members to hide in, purchasing weapons and supplies, in addition to manufacturing explosive materials, over the past few months.