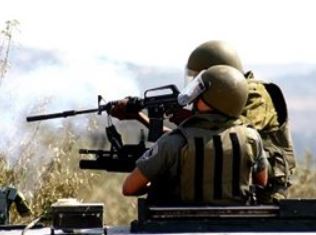 Saturday Evening [November 30, 2013] Israeli soldiers attacked dozens of nonviolent Palestinian and international peace activists protesting near the Beit El illegal settlement, north of the central West Bank city of Ramallah, kidnapping three. The protest was held against the Israeli “Prawer-Begin” Negev displacement plan.
The attack took place after activists tried to stop a group of Israeli settlers from blockading the Ramallah-Jalazoneroad and throwing rocks at Palestinian cars driving in the area. Dozens of Israeli soldiers were deployed in the area, violently assaulting both residents and peace activists. Soldiers fired gas bombs, concussion grenades, and rubber-coated metal bullets, an issue which led to clashes between local youth and the soldiers.

The army then closed the Ramallah-Jalazoneroad, the main road which links the northern and central parts of the occupied West Bank, stopped and interrogated dozens of residents, and forced them back.

Eyewitnesses said that the army kidnapped three young Palestinian men as hundreds of residents and peace activists marched towards the illegal Beit El settlement, protesting the Prawer-Begin Negev Plan. One of the kidnapped has been identified as Zeid Sho’eiby.

Another protest began in front of the Al-Biereh City Council, near Ramallah; as the protesters marched, soldiers fired dozens of gas bombs and concussion grenades at them, while a number of soldiers and settlers fired rounds of live ammunition.

The Prawer-Begin Plan aims at illegally confiscating nearly a million dunams of Arab – Bedouin land in the Negev, and the total destruction and removal of thirty “unrecognized villages”, an issue that would lead to the displacement of nearly 100,000 persons.

By displacing the Arabs from the Negev, and the construction of malls and “Jewish-only” areas, Israel will be blocking any geographical contiguity between the Negev, Gaza and Sinai. The plan aims at forcing the Bedouins (approximately 200,000 persons total) into the As-Siyaj area (less than 100,000 dunams).