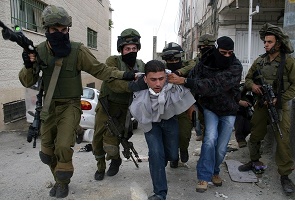 Soldiers also invaded various neighborhoods in Hebron city, and installed roadblocks at the entrances of Halhoul and Sa’ir towns, north of Hebron, Yatta and ath-Thaheriyya towns, south of the city, stopped and searched dozens of Palestinian cars and investigated the ID cards of the passengers.

Misbah, a father of four children, was forced out of his home after the soldiers violently invaded his property and searched it, causing anxiety attacks among the children.