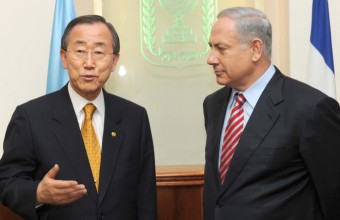 Israeli media reported, today, that PM Benjamin Netanyahu tried to convince UN Secretary-General Ban Ki-Moon to eliminate the international investigation regarding the latest Israeli aggression on the Gaza Strip.According to the Palestinian News Network, an Israeli paper stated that Netanyahu alongside many Israeli officials during their meetings with Ban, and tried to convince him of not proceeding with an international investigation around the case of Gaza, claiming that Israel is pursuing ‘private investigations’ that ‘will be shown to the UN’.

Additionally, the UN chief is said to have stressed that the decision of the international investigation cannot be withdrawn, saying that he will await the UNHRC investigation results, and that he wishes Israel to assist the council members in the procedure.

Reliable sources reiterated to the PNN today’s news from Haaretz, which focused on US Secretary of State John Kerry’s pressure on Palestinian President Abbas to resume negotiations with Israel and adopt different claims, that Abbas might refrain from going to the UN Security Council.

Palestinian sources say that Kerry has assured that he had new ideas for restored negotiations, but wanted to take approval from president Abbas before revealing any details.

PLO secretary, Yasser Abed-Rabbo, said that the Palestinian Authority has refused to go back to negotiations as before, since they fruited nothing but growing Israeli persecution and aggression, topped off by the latest Israeli assault on Gaza which killed nearly 2,150 people.