Israeli Elections To Be Held March 17 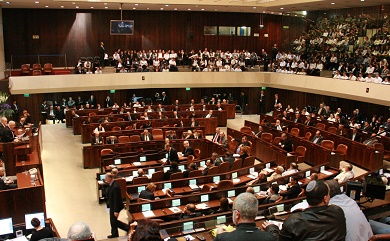 Israeli daily Haaretz has reported that the bill to dissolve the Knesset passed the first reading, Wednesday, in a 22 to 0 vote, preparing to head for new elections on March 17 2015.The developments came less than a day after Israeli Prime Minister Benjamin Netanyahu fired Justice Minister Tzipi Livni, and Finance Minister Yair Lapid.

Later on Wednesday evening, Knesset members passed a 22-0 vote dissolving the Knesset in the first reading, with only three abstentions.

Haaretz said the vote came just a few hours after the bill to dissolve the Knesset passed a preliminary reading with a 84 to 0 vote, with one abstention.

It added that the umbrella proposal grants the Knesset a period of three to five months to prepare for new election after the Knesset has been dissolved.

There will be two more readings at the Knesset next week, and after the approval, the Knesset moves to elections recess.

According to Haaretz, Netanyahu stated Tuesday he has no plans for a coalition of a right-wing block, and that theoretical talks of a ‘a center-left’ bloc are likely to be fast.

On Tuesday, Netanyahu fired both Livni and Lapid after accusing them of trying to out throw him, and for defying his own polices, including his insistence that the Palestinians must recognize Israel as a Jewish State, and his policies regarding the “Iranian Nuclear File.” http://www.imemc.org/article/69895