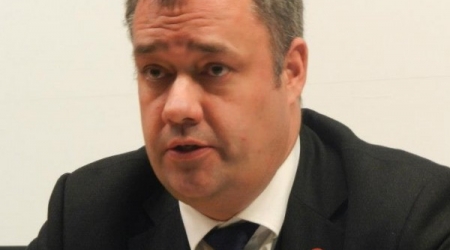 A number of academics, lawyers and politicians have asserted the claim that the international committee to investigate Israeli war crimes in Gaza must be based in Jordan, stressing that they will not underestimate the legal value of any issued decision.According to Al Ray Palestinian Media Agency, in a seminar organized by the Council of International Relations, Monday, at Al Marana hotel in Gaza, attendants stressed the necessity of supporting the presence of the committee to Gaza by recruiting all relevant political parties, including the Palestinian Authority, to file an objection at the Human Rights Council which rejects the plan of conducting investigations from Jordan.

British lawyer and counsel to the queen, Toby M. Cadman, said via Skype that Israel has insisted on evading its responsibility in crimes committed on Gaza, pointing out that in a similar attack on Gaza, in 2008, Israel had refused to deal with the investigations committee.

See: 11/21/14 Israel Agrees to Work with Probe into Attacks on Gaza UN Facilities

He also assured that this decision is not up to the state, whereas the decision of forming the committee is a UN resolution, further pointing out that there is a sort of positivity in opening the issue, despite the Israeli ban.

Meanwhile, he denounced the United Nations and International communities on the Israeli rejection, making clear that the step to ensure justice and accountability is to sign and ratify the Rome Statute, thereafter making an immediate request that an investigation has commenced.

Related: 04/14/14 PCHR Calls Upon Palestine to Immediately Accede to the Rome Statute

Mr. Cadman called for the urgent need to continue the investigation: ‘ …this rejection is considered to be as a stab in the way of reaching the backbone of truth, evidence and documents…’ and, in doing so, called the Palestinian National Authority to head to the International Criminal court to bring Israel to justice.

Furthermore, on his part, Head of Arab Lawyers Association in Britain, Sabbah Mukhtar, said that ‘the simplest rules of investigation is to preserve the crime scene and not to change any of the facts. Also, the investigator should have an access to the crime scene to get evidences, date and witnesses.’

He added in his own intervention, via Skype, that the Israeli ban to the committee ‘is a clear attack on applying law; Israel had attacked the Canadian investigation lawyer, who heads the committee and accused him of not being neutral, though collecting evidences is only an investigative procedure, not a judgment…’

He continued: ‘Despite Goldstone‘s statement that he is a Jewish and a Zionist, Israel tired to prevent him from conducting any investigations at that time, accusing him of not being loyal and working against it. This shows that the problem is not in the investigating judges, but in the Israeli policy to block access to the facts and pursuit to absenting the justice, and cover up its crimes.’

Mr. Mukhtar has also assured that conducting the investigation from Amman is improper according the technical and legal standards: ‘The investigation cannot be done away of the crime scene. Also, it is practically cannot move dozens of people to Jordan to investigate with them or take their statements.’

He also denounced the approval by the Canadian head of the committee to investigate from Amman, saying: ‘This investigation would be incomplete significantly and cannot be considered as an investigation.’

He additionally denounced the official Arab position, including that of the Palestinian Authority, saying that the investigation must be representative of the people and the Palestinian cause, and should take a tough stance as a rightful owner.

At the same time, denouncing the Egyptian restrictions on the besieged Gaza Strip, he stressed that the states have to shoulder the responsibility of humanitarian tragedies towards the neighboring countries which Egypt inversely operates.