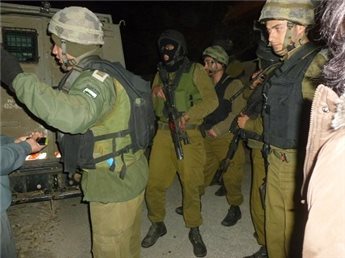 Israeli forces broke into the home of a Ma’an News Agency reporter in Jerusalem, post-midnight Wednesday, inspecting the house thoroughly as they searched for her brother Majdi, who was at work when the soldiers arrived. Maysa Abu Ghazala said that her elderly father was detained, while her brother Ali was pressured to make sure Majdi would turn himself in.

The soldiers, she said, broke into the house at 1:30 am, saying that they wanted to detain Majdi. They were told that Majdi was at work and, so, they inspected every room thoroughly before forcing the family to telephone him and tell him to appear at an Israeli police station.

According to Ma’an, the soldiers then detained Majdi’s father Mahmoud Abu Ghazala, aged 72, and his son Ali, 29, taking them to Beit Orot settlement on the Mount of Olives, then to the Russian Compound interrogation center.

The men were later released, after Majdi arrived at a police station on Salah al-Din Street.