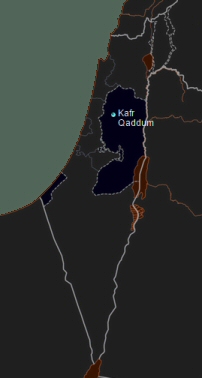 Salem military court has sentenced activist Murad Eshtewi, from Kufr Qaddum village, to 9 and a half months of prison, with an additional 10,000 shekel fine. Israeli forces arrested Eshtewi on April 29th, 2014 in the middle of the night accusing him of participating in and arranging Kufr Qaddum demonstrations.

The unjust decision of the military court states the following:

· 9 and a half months of actual prison time.

· A 5-year probation period after his prison term, where he cannot participate in any Kufr Qaddum peaceful demonstrations, or he will face a sentence of no less than 12 months in prison.

· A 3 year probation period after his prison term, where he cannot participate in any peaceful demonstrations against the Israeli military anywhere else, otherwise he will face a sentence of no less than 6 months in prison.

Murad has been detained in Majedo (Megiddo) Military Prison since his arrest in April, and has been suffered from many health problems during this time. His lawyer, Adel Samara, states that Murad has lost over 9 kilos in weight due to harsh and unsuitable holding cells.

In a letter from Murad, he stated the following:

“The accusations that I am charged with is unfair because it is our legal right to protest and participate in demonstrations against the occupation and to struggle for our self-determination as Palestinians.” He added that the peaceful marches in Kufr Qaddum will continue even if the occupation suppresses them over and over again.

Since the arrest of Murad, the Israeli army has raised its level of brutality in dealing with Kufr Qaddum demonstrations. 15 protestors have been shot by live bullets, last week alone recorded two live bullet injuries, a local youth and an Italian supporter, shot in cold blood just for participating in peaceful protests.

Murad calls on the international community and the United Nations to support Kufr Qaddum, to open the road closed by Israeli forces, to support the fair quest of a free Palestine, and to end the occupation and its settlers.

“They fine us so they can pay for more guns and weapons to kill us with,” Murad added.

Finally, Murad calls on the people of Kufr Qaddum to keep on struggling against occupation and to never give up.