Lapid: Netanyahu Lives in an Aquarium, Will Fail at Next Elections 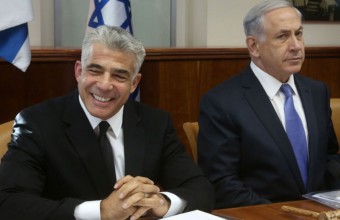 Ya’ir Lapid, of the Yesh Atid party, announced Wednesday that he was running for Prime Minister, and will win over Netanyahu. Lapid addressed Netanyahu, saying that he lived in his own aquarium and had no idea what troubled the people of Israel, the Palestinian News Network reports.

At a Tel Aviv press conference, Mr. Lapid said, regarding Netanyahu’s decision to dissolve the coalition, that ‘He made a mistake and the price of this mistake is that he won’t be the prime minister.’

According to Lapid, by calling for early elections and thus blocking passage of the 2015 budget and all its attendant policies, Netanyahu prevented increased defense, education and health spending; blocked an agreement on the public sector minimum wage; and stopped housing plans from moving forward.

Lapid denied any attempts to overthrow Netanyahu from his position:

‘I tried to overthrow you? Do you hear yourself? Who sold you that absurdity? And what caused you listen to it?’

Lapid promised voters that he will stick to his policy agenda following the elections, which are scheduled on Wednesday for March 17.

Search IMEMC: ‘Lapid’ for the latest on this development.