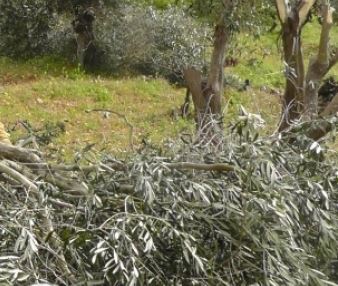 A group of fanatic Israeli settlers invaded, Friday, a Palestinian olive orchard belonging to a resident of ‘Aqraba village, near the northern West Bank city of Nablus, and cut at least 50 trees.
Palestinian official Ghassan Daghlas, in charge of Israeli settlements file in the northern part of the occupied West Bank, said the settlers came from Elon Moreh illegal settlement.

The official also said the settlers damaged several other olive trees during the attack, and fled the scene.

He added the villagers filed a complaint to the Israeli District Coordination Office (DCO), through the Palestinian DCO office in Nablus.

Extremist Israeli settlers, illegally living in the occupied West Bank, are responsible for the destruction of dozens of thousands of Palestinian trees, in addition to constant attacks against homes and property.

The attacks include burning and trying to burn mosques and churches, in addition to defacing graveyards and destroying tombstones, in the West Bank, and in occupied Jerusalem.

The fanatics repeatedly defaced property, and wrote racist graffiti, such as “Death to Arabs,’ in addition to graffiti that includes direct insults to Jesus Christ, Virgin Mary and Prophet Mohammad.