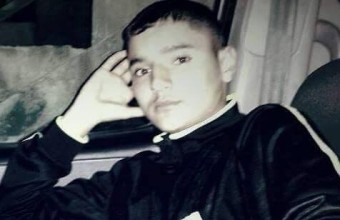 14-year-old teen Khaled Al-Sheikh from Beit ‘Anan village, West Jerusalem, was kidnapped by Israeli forces and has been detained for 40 days, now, under the pretext of throwing stones at Israeli soldiers.Khaled’s father, Hussam Al-Sheikh, told the Palestinian News Network (PNN) that Israeli forces kidnapped his son on the 25th of December, 2014, upon which he was taken to the Benyamin police center for investigation.

Hussam met his son the same day, at midnight, with signs of a beating apparent on the boy’s face. He added that Khaled had been moved to Ofer prison in Ramallah, where he appeared before three courts. The last court accused him of throwing stones and burning tires, and every court has ruled to extend his detention period and reject financial bail.

Khaled’s father added that his son was going through hard times, in addition to the brutal beating he takes. ‘The first time I saw him in court, his hands and legs were cuffed. He was prevented from talking to us,’ Mr. Al-Sheikh told the PNN.

He added that his son suffered from anemia, with his last blood test showing an HGB level of 8, and that this was his biggest concern.

‘I don’t know whether he [Khaled] is taking his drugs or not, since he had a special diet and medicines.’

He explained that, when he told the court judge of his son’s condition, the judge responded that he considered Khaled to be ‘a security threat to Israel.’

Khaled’s father was shocked by the court’s decision, and that a man in his fifties can imprison and judge children in such a manner.

‘The normal place for children is their school or playground and not prison,’ he concluded.

According to Census Department of the Palestinian Commission of Detainees report, Israeli forces kidnapped 3755 children in the last four years, including 1266 in 2014.