Who is Netanyahu? Why Should Congress Boycott his Speech? 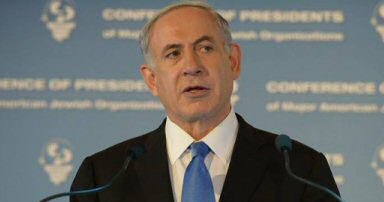 Benyamin Mileikowsky (aka Netanyahu) was born to Benzion Mileikowsky (later changed names to Netanyahu), a polish immigrant.His American father became secretary to terrorist leader Vladimir Yevgenyevich Zhabotinsky (aka Zeev Jabotinsky) founder of ‘revisionist’ Zionism and supported groups like Irgun terrorist organization during the mandate in Palestine. His son continues to idolize these early Jewish terrorists. Both Benjamin and his brother served in units of the Israeli forces responsible for assassinations on foreign lands (in violations of international law) and committed other war crimes.

Benjamin Miliekowsky (Netanyahu) is known both among Israelis and globally as a consummate liar who refused to accept the Oslo accords (even though they were partial to Israel) and has gotten rich off of his political activities. Here is a video of him thinking the camera was off explaining his true contributions during his first stint as Israeli prime minister in the 1990s.

This is, after all, the same terrorist who gave a speech to dozens of Likud Party members in Eilat in which he admitted this is his strategy. According to the Israeli newspaper Haaretz (15 July 2001): ‘…giving his audience a bit of advice on how to deal with foreign interviewers (Netanyahu said): ‘Always, irrespective of whether you’re right or not, you must always present your side as right.’

In 2011, the French president, Nicolas Sarkozy, described Netanyahu as a liar in a private exchange with US President Barack Obama at the G20 summit (it was inadvertently broadcast to journalists). ‘I cannot stand him. He’s a liar,’ Sarkozy told Obama. The US president Obama responded by saying: ‘You’re fed up with him? I have to deal with him every day.’

Rajai Masri wrote ‘The world, as I am sure you would agree with me, is made up of a cluster of Zones termed Spheres of Influence. No small fish, like a miniscule Jordan for example, can ever survive without falling under one of these spheres of influence.

Israel with the vanity of access to the Exceptional powers, resources and reaches of the world Jewry imagines that through the fragmentation of the Middle Eastern region into sectarian and ethnic constituency. Given Israel’s exceptional military prowess, it could ultimately dominate the whole Middle East and render, in the example of Sparta in the old history, the fragmented entities of the Middle East vassal clients rendering the region Israel’s Sphere of Influence.’

I would agree and add that Israel (Netanyahu’s last tirade) fixation on Hizbollah, Syria, Hamas, and Iran only shows who actually stands in resistance to this blood-drenched scenario planned by the Zionist movement. As I always said, Zionism as a racist movement built with ethnic cleansing will lose either way it chooses: by being forced with BDS and world outrage as happened in South Africa or violently in conflict. Most of humanity prefers the non-violent pressure and we must act to pressure.