British Cyclers Set Out to Remap the Nakba 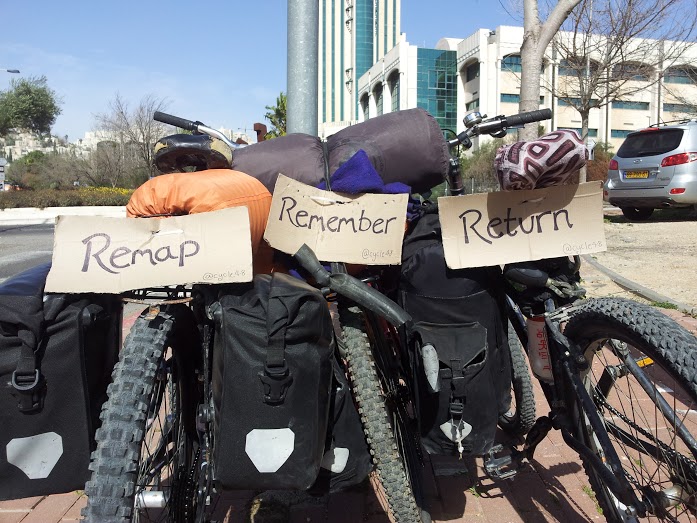 Cycle ’48 is a collective of 3 British women who all cycled to Palestine from the UK. The project aims to remap the erased histories of the Nakba, promoting the Right of Return for Palestinian refugees whilst exposing the role of the Jewish National Fund, in their ethnic cleansing policies.Cycle ’48 is an ongoing project remapping erased histories on two wheels. Last week we left Aida Refugee Camp in Bethlehem, and joined the Jewish National Fund cycle trail from Jerusalem to Tel Aviv in order to uncover the hidden stories on its path.

We are standing outside ‘Derech Eretz’, a swish wedding venue nestled between rolling green hills, the ground is littered with red poppies and bright yellow mustard flowers. An immaculate green lawn stretches out before the wood-paneled modern building. In the far corner there is a bar/DJ booth, its walls decorated with irregular golden stones. A few feet above it, higher on the hill, is a beautiful golden ruin with arched windows and doorways.

The manager rests one arm casually on the entrance of the venue, where chairs and tables are adorned with beautiful fabric and set ready for a celebration feast. His other arm gestures wistfully in the air as he tells us what he knows of the land we are standing on.

‘There’s lots of Roman history here’, he begins, avoiding the issue for some time.

‘What about ’48?’ we ask, the year of the Palestinian Nakba (catastrophe). ‘Do you know the name of this village?’, we point to the ruins which are now fitted with dramatic lighting.

‘Mmm’, he strokes his chin. “No, I don’t know the name,” he shrugs. “The Arabs ran away – there were some rumours spread and they left.”

“Nobody died”, he is quick to add. “That’s the story, nothing to cry about”.

We are standing on the site of Dayr Aban where, in January 1948, the village was surrounded by armed Jewish forces. The village was later completely occupied by Jewish militia in October 1948, all of its inhabitants were expelled, and prevented from returning.

Now a wedding venue stands on its ruins.

The manager, casually leaning in the doorway takes the time to listen to the Israeli guide we are with, who recounts what happened on this land in 1948. The battles that took place here, the refugees who fled, and yes – the Palestinians that were killed.

‘That’s another story’, he says, and flails his arms wider, ‘but they are just stories’.

We steal a glance at each other, remembering the cups of tea we have drunk in the past few days with different refugees in camps across the West Bank. They are not just stories. People are still living with the consequences of 1948. In Dheisheh camp, where many of the refugees from Dayr Aban now live, over 13,000 people live in one square kilometre. Poverty is rife in these overcrowded conditions. The children of 1948, who began their lives in the luscious fields and hills of what is now Israel, have grown old among concrete walls. Without space to grow food, without space to play, and without freedom to move.

The golden stone ruin behind us is now fitted with expensive lighting and decorated to create a beautiful wedding ‘backdrop’, a romantic space for newlyweds’ first night together. But it is not just golden stone. It is not just a ruin. It was a home, that someone somewhere still dreams of returning to.

All over what is now Israel, there used to be Palestinian villages. Many of these once thriving communities have been completely erased from the map; others – like Dayr Aban – are recognisable because some ghostly, stone structures still remain. However, even when there is a Mosque in the middle of Malha, or abandoned homes right on the roadside, the meaning of these stones is studiously ignored or distorted. In Israel, the Zionist historical narrative, which dominates school curriculum and national memory, has no space for these Palestinian remains.

Cycle ’48 is a project to uncover these stories that lie buried under forests, parks and wedding venues. To remap the Palestinian villages that were cleansed of their inhabitants, to remember a history that is denied, and to promote the right of return for Palestinian refugees.

We came to this country with massive privilege, with British passports and white skin – one of us is also Jewish, which affords extra privilege at this time. We want to see equality here, universal human rights, rather than freedom granted on the basis of skin colour, nationality, or religion. We want to respond to the realities of occupation and apartheid, and to resist the erasure of a people from their land.

Why by bike? Well, as environmental and bicycle enthusiasts, we all cycled to Palestine/Israel from the UK. We think bicycles are the most empowering form of transport, and we want to use them to change the world!

We believe in grassroots action to effect change. This injustice will not stop because politicians develop a conscience or decide to start abiding by international law. This occupation will end, the wall will fall, the refugees will return, when we – all of us – make that happen. We heed the call from Palestinian civil society for Boycott, Divestment and Sanctions (BDS); we have to hold Israel to account for its brutal regime of occupation, colonization and apartheid because the United Nations and global leaders have failed to do so.

As environmentalists from the UK, we were particularly drawn to the campaign against the Jewish National Fund (JNF) which is part of the broader BDS movement. The JNF (known as Ḱaren Kayemeth LeIsrael or KKL in Israel) enjoys an international reputation as an environmental charity; it largely works through the seemingly innocent guise of tree planting. According to its website, ‘Planting a tree in Israel is the perfect way to show you care. You can plant trees for many different reasons and help green the land of Israel while sending a special gift to a friend or loved one.’ This campaign to ‘green’ Israel, however, has much darker foundations. It is part of a deliberate strategy to destroy the remnants of historic Palestine, to obscure the villages that once stood, and deny the existence of the indigenous population.

The Jewish National Fund was established in 1901; it was at the forefront of the Zionist project to establish a Jewish homeland in Palestine. Following the mass ethnic cleansing in 1948, the JNF acquired 1,000,000 dunam (250,000 acres) of land that belongs to the Palestinians who had been forced from their homes.

Since its inception, the JNF has been instrumental in the ‘de-Arabisation of Palestine’. More than two-thirds of JNF forests and parks – 46 out of 68 – conceal or are located on the ruins of Palestinian villages demolished by Israel and until today the JNF refuses to re-sell any of its land to non-Jewish citizens of Israel.

While serving as a fundraiser for Israeli policies of displacement of Palestinians, erasure of their memory, and destruction of the natural environment, the JNF enjoys charitable status in the UK (through its affiliate organisation, the JNF UK) and in 50 other countries throughout the world.

So, armed with outrage that the JNF raises money in our country to deny Palestinians access to theirs, we climbed back on our bikes. We decided to use the JNF’s own bike trail to remap what they are trying to erase.

The bicycle trail is utterly beautiful. We wound through parks, scenic forests, and nature reserves. Along the way there were signs, plaques and monuments; commemorating the history of suffering of the Jewish people, and celebrating the support of Jews around the world in the creation of a green Israel. A perfect narrative – formulated through shining signs glistening in the sun and solid stone steadfast in the rain – of victimhood to victory.

With the marks of officialdom and authority, the JNF signs are persuasive, gently pushing you to remember the victims of the Holocaust whilst forgetting those of the Nakba. They have not just planted trees over the remains of villages, destroying any physical reminders, they have planted a new historical narrative on the space. Jumping from the Roman period, to the oppression of the Jews in Europe, to the generosity of the global Jewish community in helping the JNF ‘make the desert bloom’.

The JNF cycle trail from Jerusalem to Tel Aviv is built on the land of dozens of Palestinian villages; communities that were growing and thriving until 1948 when they were abruptly, violently destroyed. Forced out at gun point, or fleeing due to the well-founded fear of attack, Palestinians left their homes and lives – hoping to return soon. We stopped at the sites of some of these villages, places that are ingrained in the memory of Palestinian families we have met, yet are now determinedly wiped off the map, and out of the history books.

Whilst their history is so cleverly and coherently erased, there is no hope for justice on this land. The Nakba is at the heart of this conflict, to gloss over it, plant some trees, declare it ‘just a story’, only condemns everyone here to more violence and suffering. Just as Germany is working to come to terms with the tragic history of the Holocaust, providing public space for commemoration, and challenging Holocaust deniers; so too must Israel face up to the ethnic cleansing of Palestine. Just as the anti-Semitism that is still rearing its ugly head across Europe must be challenged, so too the racism and oppression of the Palestinians must be stopped.

We called this project Cycle ’48 because we believe that a just solution begins with the recognition of the war crimes during the Arab-Israeli War of 1948 – the catastrophe for Palestinians. But the ethnic cleansing of Palestine did not start and end in this year. Today Palestinians are still being forced from their homes. The Nakba continues.

As the powerful JNF/KKL puts up its signs and monuments, attempting to create new associations on this land and to control its history, we will get on our bicycles and tell a different story – remapping and remembering Palestine of ’48, until the Palestinian refugees themselves can return to this land. EuroMed: Israel collectively punishes the population in Gaza by targeting homes and civilians