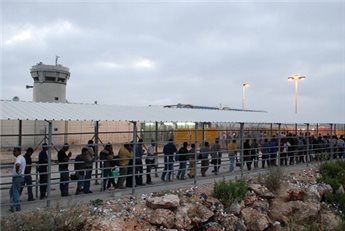 17-year-old Muhammad Asri Fayyad, from the northern occupied West Bank, says he was violently assaulted by Israeli soldiers at al-Jalama crossing, north of Jenin, while trying to cross into Israel.The youth told Ma’an News Agency, Saturday, that he arrived at the crossing on Thursday morning, along with a busload of young men and teenagers who had organized a trip to Israel and obtained the needed permits from Israeli authorities.

He says he entered the crossing and complied with the instructions being given by Israeli officers over the loudspeakers. The instructions included ‘that we shove our mobile phones in one place and we cross from a different place, which we did,’ Muhammad stated.

‘Everybody received back their mobile phones except me. The soldiers asked me to pass through a path under a bridge, on top of which stood a number of soldiers pointing their guns at me.

‘They then asked me to enter a room which has several doors and I obeyed the orders. All the doors were immediately locked before the officers started to shout through loudspeakers demanding that I take off my clothes and my shoes.’

He added that he took off his shoes first, but the soldiers continued to shout violently,repeating that he must take off all his clothes.

‘When I took off my clothes, they turned on a huge ceiling fan which caused frigid coldness. I told them to turn off the fan because I was freezing, but they didn’t, and so I knocked on the fan in an attempt to cause it to stop. At that point the soldiers broke into the room and started to beat be with rifle butts until I fell to the ground.

‘They then tied my hand to a steel bar behind my back and tied my foot to another bar. I remained in that position from 9 a.m. until 2 p.m. After that a number of soldiers arrived and a female soldier untied me after she took a silver necklace I was wearing. She ordered me to put on my clothes, then she handcuffed and blindfolded my eyes and escorted me outside the crossing and told me that I was denied entry to Israel. She gave me a small sack in which I found the remnants of my mobile phone which had been smashed.’

Muhammad says he has been suffering severe shoulder and foot pain ever since.