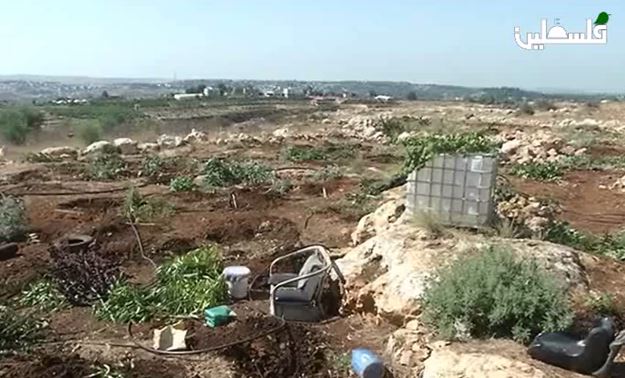 Israeli military bulldozers uprooted large areas of Palestinian farmlands, east of the northern West Bank city of Nablus, and uprooted more than 300 Olive trees. Army invades a construction company in Hebron, and nearby towns.Ghassan Daghlas, a Palestinian official in charge of Israeli Settlements file in the northern part of the occupied West Bank, said the soldiers bulldozed dozens of dunams of farmlands, in the al-Lahaf area, east of Nablus.

Daghlas added that the soldiers uprooted and cut more than 300 olive trees, and bulldozed large areas, planted with wheat and barley.

The lands belong to many Palestinians; some of them have been identified as Naji Hamdan, Mahmoud Eshtayya, Najeh Eshtayya, Sharif Eshtayya and Mohammad Eshtayya.

In addition, soldiers stormed a construction company, belonging to resident Fuad ash-Shamessly, in the southern West Bank city of Hebron, and violently searched before confiscating several filed and documents.

The soldiers also invaded a number of neighborhoods in the city, in addition to the towns of Doura, Halhoul, Yatta and as-Sammoa’.

Furthermore, the soldiers installed roadblocks on the northern entrance of Hebron, and near Sa’ir town, before stopping and searching dozens of cars, and investigated the ID cards of the passengers.