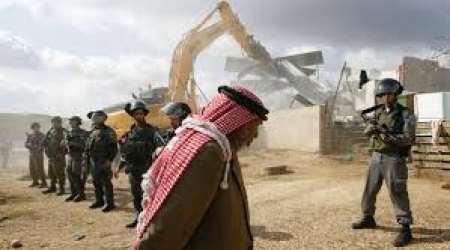 Israel’s interior ministry has announced that it demolished about 18 Palestinian homes in the Negev, within the last week, according to Al Ray Palestinian Media Agency.In a press statement, the Israeli interior stated that they oversaw a number of demolitions operation on homes, in cooperation with ‘ The Jewish National Fund’, ‘Kern Kayemt’ organization and what is known as the ‘Green Patrols’.

Israeli authorities expanded the demolition of homes, and farmlands in Negev through the past weeks, with bulldozers raiding dozens of homes in Negev villages, then destroying them under the pretext that they were built without a permit.

The campaign of demolition is still going until the date of this report, in a move that is seen as a race against time ahead of the Israeli elections to destroy the largest possible number Palestinian houses in the region in order to win more votes from electorate extremists.

The Negev is scheduled to witness a mass widespread mobility after the Israeli elections, along with mass demonstrations against the dramatically continued scheme of homes demolition since the start of 2015.