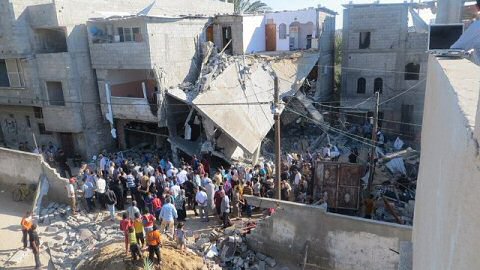 The Israeli army is targeting high schools with a new programme to increase enlistment to ground forces considered “less attractive”. The programme includes a booklet detailing all available units and soldier-led classes that will include “events and stories” from last summer’s attack on the Gaza Strip as a way to attract Israeli youth.Several weeks ago the Israeli army launched a programme to enhance enlistment to ground forces considered “less attractive”, according to the Israeli news site nrg. “We want to increase the number of those requesting the armoured units, artillery, engineering and combat intelligence”, stated a senior military officer involved in the project.

The project includes a new booklet aimed at 12th graders with comprehensive information about the various ground units, including QR codes with direct links to additional information.

The booklet, which will be sent to twelfth graders about to enlist, further features a comprehensive physical training programme developed by the combat fitness unit.

Additionally, some 150 high schools have been paired with military companies, the soldiers of which will give lessons to the students. Nrg reports that some of the lessons are based on events and stories from Israel’s military attack on the Gaza Strip last summer in order to “attract the youth”.

During this attack, some 2,200 Palestinians were killed and over 10,800 wounded.