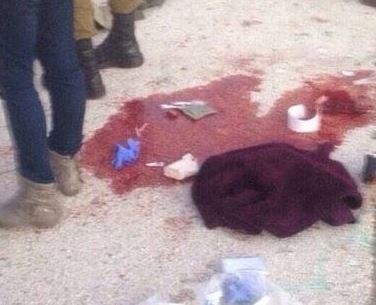 Israeli soldiers shot and killed, on Wednesday morning, a young Palestinian man, north of the central West Bank city of Ramallah, allegedly after he stabbed two soldiers, causing serious wounds to one of them.The sources said the attack took place, nearly at 10 in the morning, close to Ma’ale Levona settlement, and that the Palestinian is from Sinjel nearby village.

The wounded soldiers received treatment by Israeli medics, and were moved to the Shaare Zedek Medical Center, in Jerusalem.

According to Israeli reports, the Palestinian approached the two soldiers before stabbing one in the neck, causing serious wounds, while the second soldier, who is also a medic, sustained minor injuries to the head and shoulders.

The soldiers asked the seven to identify the slain Palestinian, especially since he did not carry an ID card, but they could not identify him.

They said the Palestinian was shot in the head, and next to him was a clean knife that did not carry any trace of blood.

Close to two hours after his death, the Palestinian was identified as Mohammad Jasser Abdullah Karakra, 27 years of age, from Sinjel village.