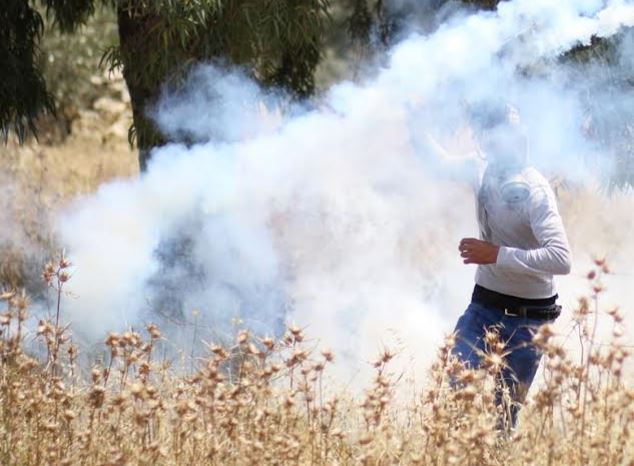 Scores of protesters suffered the effects of tear gas inhalation, while many olive trees caught fire, after Israeli soldiers used excessive force against the weekly nonviolent protest against the Annexation Wall and settlements, in Bil’in village, near the central West Bank city of Ramallah.
The soldiers attacked the nonviolent Palestinian, Israeli and international peace activists as they marched from the center of the village, heading towards the Wall that isolates the villagers from their lands.

The protesters carried Palestinian flags and posters, and chanted against the ongoing Israeli violations targeting the Palestinian people and their lands.

The Popular Committee Against the Wall in Bil’in said it is determined to continue the struggle until Israel ends its illegal occupation of Palestine.

In addition, the army kidnapped Mohammad Adib Abu Rahma, 19 years of age, while trying to travel to Saudi Arabia for pilgrimage, for “participating in the weekly protests in Bil’in.” Abu Rahma was previously kidnapped, and imprisoned, twice.

Bil’in is a leading village in ongoing nonviolent Palestinian protest against Israel’s Annexation Wall and its illegal settlements, and is subject to frequent invasions, arrests and attacks by the Israeli army.