Including Three Children, Six Palestinians Kidnapped In The West Bank 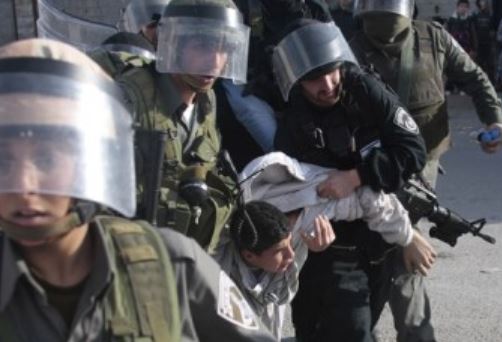 Israeli soldiers kidnapped, earlier Saturday, five Palestinians, including three children and a security officer, in the occupied West Bank, after breaking into homes and searching them, and kidnapped one Palestinian, on Friday evening.Several military vehicles invaded the Tal Romeida neighborhood, in the southern West Bank city of Hebron, before violently searching and ransacking a number of homes.

Israeli extremists of the Ramat Yeshai illegal outpost attacked the two children, before the soldiers arrived on the scene, and kidnapped them, instead of removing the assailing fanatics.

Another Palestinian identified as Thaer Mohammad ‘Amro, 22, was kidnapped after the soldiers stormed his home, and searched it, in Doura, south of Hebron.

Kabaha, from Toura al-Gharbeyya village, west of the northern West Bank city of Jenin, was on his way to Jericho to participate in a special training course.

Other military units searched farmlands, and installed a roadblock leading to the villagers’ orchards.

In Bethlehem, local youths clashed with soldiers invading Jabal al-Mawaleh area, and threw a Molotov cocktail on one of the military vehicles.

The soldiers tried to ambush the protesters, but withdrew after failing to kidnap any of them.

In addition, soldiers invaded ‘Ailet ‘Ali area, east of Bethlehem, and handed one Palestinian, identified as Ahmad Ibrahim Ali, 30 years of age, a military warrant for interrogation in the Etzion military base.

The army also invaded Bethlehem city, searched a number of homes, and handed a similar order to ‘Issa Nader Saleh, 18.

In addition, Israeli soldiers said they arrested a Palestinian teen, “after attempting to stab a soldier”, at the Tunnel Roadblock, south of occupied Jerusalem.

The Israeli Radio said the teenager “raised a knife and tried to stab a soldier, before he was subdued.”

The unidentified teen was moved to an Israeli military center for interrogation, the Israeli Radio added.

On Friday evening, soldiers invaded Wad al-Jouz neighborhood, in occupied Jerusalem, and clashed with local youths before kidnapping one Palestinian, identified as Mohannad Saharabati, 19 years of age, near Abdin Mosque.