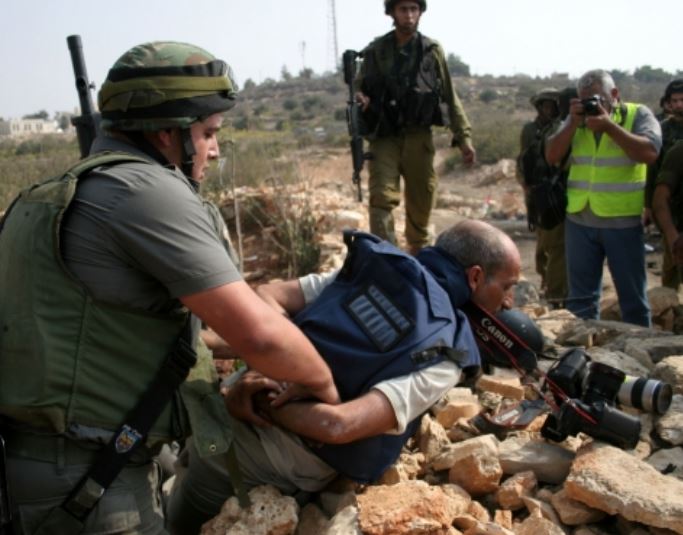 The Palestinian Radio and Television Union has reported that Israel soldiers kidnapped a Palestinian journalist, shot and injured six others, in April. In a report on Israeli violations against the media in Palestine in April, the Union said that Israel’s violations against the journalists, and media outlets, aim at silencing them, and preventing them from covering those aggressions.

The Union said the soldiers also detained four journalists in an attempt to prevent them from documenting their violations.

It stated that the recent Israeli attack on Journalists in Nabi Saleh village, near the central West Bank city of Ramallah, is a clear indication of those illegal policies, as in that incident, the soldiers chased the journalists and started throwing stones on them, in addition to trying to run them over with their jeeps.

In addition, the army kidnapped the head of the Asda Media Center, Journalist Amin Abu Warda, and forced him under arbitrary Administrative Detention, without charges or trial.

The abduction of Abu Warda brings the number of Palestinian journalists, held by Israel, to twenty.

The Union stated that journalist Nidal Eshtayya was also shot by two Israeli rubber-coated metal bullets, from a very close range, while reporting on a peace protest, near the northern West Bank city of Tulkarem.

The Union expressed its deep concern over the escalating Israeli violations and assaults, against the journalists in Palestine.

It managed to document an attempt to ram several journalists with military vehicles, near the Ofer detention center, west of the central West Bank city of Ramallah.

It added that the army frequently resorts to using the journalists as human shields during protests in different parts of the occupied West Bank.

In March, soldiers detained nine Palestinian journalists in the West Bank and the 1948 territories; five of them are employees of the QPress news agency after the army stormed its headquarters in the West Bank city of Bethlehem.

Two of the reporters, who were kidnapped in March, are still imprisoned by Israel.