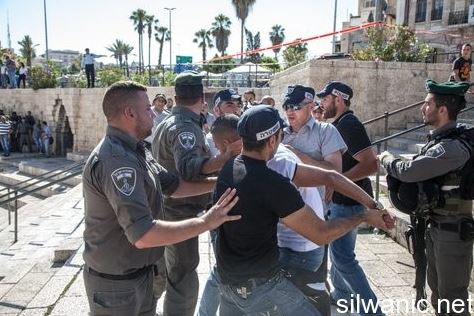 Israeli soldiers and police officers used excessive force, on Sunday afternoon, against hundreds of Palestinians in occupied Jerusalem, as they marched to counter a provocative Israeli procession marking the so-called “Jerusalem Day,” wounding at least 29 Palestinians, and kidnapped five.The Israeli extremists attacked many Palestinians, and conducted provocative acts against Jerusalemite Palestinians who were forced by the police to close their stores and shops in Jerusalem’s Old City.

Palestinian sources in the Old City said hundreds of police officers and soldiers were deployed in the alleys, in addition to pushing the Palestinians away from Bab al-‘Amoud area, in an attempt to prevent them from marching to counter the Israeli procession.

Mounted officers and Border Guard police officers also attacked dozens of Palestinian journalists, and tried to prevent them from documenting the incidents and the Israeli violations.

Eyewitnesses said dozens of Israeli fanatics were chanting “Death to Arabs,” as well as many other provocative slogans, while many also called for demolishing the Al-Aqsa Mosque in Jerusalem in order “to rebuild the temple.”

Meanwhile, the Palestinians marched carrying Palestinian flags while chanting for the liberation of Palestine, and called for ending the escalating Israeli violations against the residents and their holy sites, especially in occupied Jerusalem.

It is worth mentioning that several Israeli left wing groups appealed the Israeli High Court to prevent the Israeli extremists from marching in Jerusalem’s Islamic Quarter, but the court denied the appeal.

The Wadi Hilweh Information Center in Silwan (Silwanic) quoted the head of the Emergency Unit of the Palestinian Red Crescent Society in Jerusalem, Amin Abu Ghazala, stating that at least 29 residents were injured.

Abu Ghazala said at least seven of the wounded residents were hospitalized, and that two residents suffered fractures in their arms and legs, 22 received treatment by field medics, and at least one was severely beaten by the soldiers with their guns and batons.

It added that the soldiers detained dozens of Palestinians after assaulting them, and released them after taking their personal information, and told them the police will be contacting them in the coming few days.

It said that, due to Israeli restrictions and extensive military deployment, the residents marched in separate different groups in Sultan Suleiman Street, al-Magharba Square and near the Suleiman Cave area, before the police attacked them, and chases dozens of Palestinians.

Israeli Ynet News said dozens of Palestinian hurled stones and empty bottles at the police, and that one officer was injured, while one Palestinian was arrested allegedly for attacking an officer.

Jerusalem Day marks the illegal occupation of East Jerusalem in 1967, and declaring it as the “eternal united capital of Israel.”