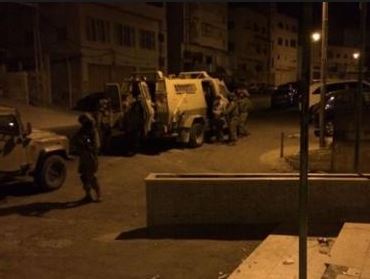 Israeli soldiers kidnapped, on Sunday at dawn, one Palestinian near the northern West Bank city of Jenin, and wounded several others, while another resident was kidnapped in occupied Jerusalem.Media sources in Jenin said several armored Israeli military vehicles invaded Ya’bad town, southwest of the city, and clashed with dozens of local youths who hurled stones and empty bottles on them.

The clashes mainly took place in the al-Bayyara area, while the soldiers also surrounded several nearby areas.

Soldiers fired a few rounds of live ammunition, and several gas bombs, causing many residents to suffer the effects of tear gas inhalation, and invaded at least one home before kidnapping a Palestinian teen, identified as Yousef Burhan Turkman, 17 years of age.

In addition, soldiers invaded at least one home in Ras al-‘Amoud neighborhood, in Silwan town of occupied East Jerusalem, and kidnapped one Palestinian, after violently breaking into his home and searching it.

The kidnapped Palestinian, Amer al-Bazlameet, 27, was moved to an interrogation center in the occupied city; he is a married father of three children.

On Saturday, soldiers invaded several neighborhoods in the ath-Thaheriyya town, near Hebron, drove around before closing a number of roads, and withdrew to nearby military camps.

Several military vehicles also invaded the Deheishe and the al-‘Azza refugee camps, in Bethlehem, and withdrew later heading towards the Etzion military base.